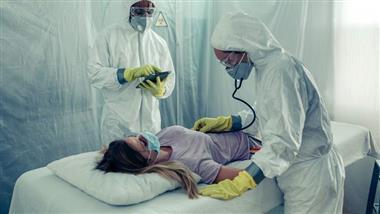 I’ve often stated that if you want to stay healthy, staying out of hospitals, except in cases of emergency, is highly recommended. Not only are hospitals the scene of tens of thousands — and possibly hundreds of thousands — of preventable deaths annually due to medical errors,1 but they’re also notorious for spreading lethal hospital-acquired infections.

Each day in the U.S., about 1 in 31 hospital patients has at least one health care-associated infection, according to the U.S. Centers for Disease Control and Prevention.2 COVID-19 is now among them, with SARS-CoV-2, the virus that causes COVID-19, being transmitted from health care workers to patients, as well as from infected patients to other hospital patients.

Figures released from NHS England suggest that up to 20% of hospital patients with COVID-19 were infected at the hospital, and Prime Minister Boris Johnson went so far as to call deaths from hospital-acquired COVID-19 an epidemic.3 The data came from an NHS briefing and was reported by the Guardian:4

“Senior figures at several NHS trusts have confirmed to the Guardian that a senior official at NHS England said in the briefing, held by telephone conference in late April, that the rate of hospital-acquired Covid-19 infections was running at 10% to 20% and that asymptomatic staff had caused some of the cases.

Senior doctors and hospital managers say that doctors, nurses and other staff have inadvertently passed on the virus to patients because they did not have adequate personal protective equipment (PPE) or could not get tested for the virus.”

The NHS briefing is not the lone warning bell to signal a problem with hospital-acquired COVID-19. Nosocomial (originating in a hospital) transmission of SARS-CoV2 was also reported in a 24-bed geriatric unit in Edouard Herriot University Hospital, the largest emergency hospital in the Lyon, France, area.

Two potential index cases were noted, including a 97-year-old man who was admitted February 29, 2020, with fever and shortness of breath, but tested negative, then tested positive March 7.

In the second potential index case, a 76-year-old man was admitted February 1, 2020, with cough and fever. March 6, he tested positive for COVID-19. From there, six other cases occurred in the same unit until March 13. The overall infection rate for COVID-19 among patients in the geriatric unit was 20%, and two of the patients (28.6%) died.

“The rapid spread of nosocomial COVID-19 in this ward confirms the contagiousness of SARS-CoV-2 in health care settings and the high mortality rates in this population. The existence of super-shedders has been suggested, which could facilitate cluster emergence,” researchers wrote in a letter to the editor of Infection Control & Hospital Epidemiology.5

The researchers searched for case reports on nosocomial infections of COVID-19, SARS (severe acute respiratory syndrome) and MERS (Middle East respiratory syndrome), revealing that, among the confirmed patients, the proportions of nosocomial infections were 44% for COVID-19, 36% for SARS and 56% for MERS. Medical staff were believed to have accounted for 33% of the nosocomial COVID-19 cases, with nurses and doctors the most commonly infected medical staff.

Hospitals Are Super Spreaders of Disease

It’s been estimated that 1.7 million health care-associated infections occur in U.S. hospitals each year, making such infections “a significant cause of morbidity and mortality in the United States.”7 During outbreaks of MERS and SARS, hospitals have been called out as super spreaders of disease, including in Ontario in 2003, where 77% of SARS cases were contracted in a hospital.8

Even in Wuhan, China, where COVID-19 is said to have originated, hospital-related transmission was associated with 41% of cases.9 Across the globe, in the early days of the pandemic and often without proper protective equipment, health care workers feared they would inadvertently spread the disease. In a news release, Dr. Nishant Joshi of the U.K.’s Luton and Dunstable general hospital, said:10

“Overnight I had a patient sneeze on me and cough on me, which happens on a daily basis. Where does that leave me? We are concerned about being vectors of transmission, we are concerned we are the super-spreaders, we are concerned that healthcare workers are spreading the infection.

The reason we’re concerned is because all the data from China, from Italy, from Iran, from other countries that have been affected by coronavirus is that healthcare workers can be vectors of transmission.”

Drastically different death rates from COVID-19 reported in different regions in Italy may also be related to hospitals acting as primary carriers of COVID-19. The American Conservative reported:11

“When the Italian regions of Lombardy and Veneto recorded Italy’s first local cases of the coronavirus, the two nearby regions were isolated by lockdowns. Since then their fortunes have diverged.

Lombardy has a death rate of 17.6 percent while Veneto’s is 5.6 percent. Veneto tested far more widely than Lombardy, but the main difference is how patients were treated. In Lombardy 65 percent of people who tested positive were sent to the hospital. By contrast, in Veneto only 20 percent were sent to hospital.

A group of doctors from Bergamo warned in the New England Journal of Medicine. ‘We are learning that hospitals might be the main Covid-19 carriers,’ they wrote. ‘They are rapidly populated by infected patients, facilitating transmission to uninfected patients.’

As a group of Italian doctors wrote in the Journal of the American Medical Association,12 ‘hospital overcrowding may also explain the high infection rate of medical personnel … Moreover, early infection of medical personnel led to the spread of the infection to other patients within hospitals. In Lombardy, SARS-CoV-2 became largely a nosocomial infection.’”

In the video above, taped April 17, 2020, Dr. John Ioannidis discusses results from three preliminary studies, pointing out that nosocomial infections appear to help explain why the COVID-19 mortality rate is so much higher in certain areas, such as Italy, Spain and the New York metropolitan area.

A common denominator between these areas is a massive number of hospital personnel who are infected with SARS-CoV-2 and who spread it to patients who are already in an immune-compromised state.

“Hospitals are the worst place to fight the battle with COVID-19,” he says. “We should have done our best to keep people away from the hospitals if they had COVID-19 symptoms, unless they had really severe symptoms.”

These findings highlight not only the need for very stringent infection control measures in hospitals to avoid transmission from asymptomatic personnel to patients, but also the need to more carefully assess your need for medical care.

Ioannidis stresses that people experiencing mild to moderate symptoms of COVID-19 should not rush to the hospital, as they simply increase the risk of infectious transmission to personnel and other more vulnerable patients.

Another surprising revelation was the poor outcomes noted among many COVID-19 patients placed on mechanical ventilators. In a JAMA study that included 5,700 patients hospitalized with COVID-19 in the New York City area between March 1, 2020, and April 4, 2020, mortality rates for those who received mechanical ventilation ranged from 76.4% to 97.2%, depending on age.13

Ironically, the “high-tech” hospitals of modern day, with their enclosed, indoor close quarters, may be facilitating the spread of disease far more so than open-air hospitals of yesteryear. “By the time of the 1918-1919 [influenza] pandemic, it was common practice to put the sick outside in tents or in specially designed open wards.

Among the first advocates of what was later to become known as the ‘open-air method’ was the English physician John Coakley Lettsom (1744-1815), who exposed children suffering from tuberculosis to sea air and sunshine at the Royal Sea Bathing Hospital in Kent, England, in 1791,” researchers wrote in the American Journal of Public Health in 2009.15

They cited records from an open-air hospital in Boston, Massachusetts, during the Spanish flu outbreak of 1918 to 1919, which suggest that patients and staff there were spared the worst of the outbreak. “A combination of fresh air, sunlight, scrupulous standards of hygiene and reusable face masks appears to have substantially reduced deaths among some patients and infections among medical staff,” they wrote.16

Fresh air and sunlight are two things notably lacking in modern hospitals, but they were in abundance at the Camp Brooks Hospital, which treated hundreds of patients during the 1919 influenza pandemic. Treatments took place outdoors to maximize sunshine and fresh air.

Exposure to ultraviolet light has been shown to inactivate viruses like influenza, while sunlight would have boosted patients’ vitamin D levels, a deficiency of which may increase susceptibility to influenza and other respiratory infections.17

The surgeon general of the Massachusetts State Guard, William A. Brooks, reported that in a typical general hospital with 76 influenza cases, 20 patients died in a three-day period while 17 nurses became ill. “By contrast,” the researchers wrote, “according to one estimate, the regimen adopted at the camp reduced the fatality of hospital cases from 40% to about 13%.”18

In the case of a future pandemic, they noted, improvements in air-handling units and portable filtration units may be warranted for hospitals and other buildings but, even better, “more might be gained by introducing high levels of natural ventilation or, indeed, by encouraging the public to spend as much time outdoors as possible.”19

At the very least, it’s safe to say that viral transmission will typically be minimized in an outdoor setting, while conventional hospitals are likely to continue to concentrate and spread disease. To protect your health, spending time in fresh air and sunshine, while staying out of the hospital unless absolutely necessary, is about as fundamental as it gets.