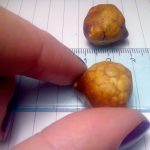 (NaturalHealth365) According to the most current data about gallstones –  deposits of crystallized cholesterol in the gallbladder or bile ducts, about 15 percent of the American population are affected by this preventable condition.

And, while many gallstones are “silent” and cause no symptoms, serious complications – including bile duct infection, pancreatitis and an increased risk of heart disease and gallbladder cancer – can sometimes occur. The good news: a variety of natural nutrients and supplements can help slash your risk of developing these potentially troublesome deposits.

Just don’t expect your conventionally trained physician to talk to you about this.

In fact, the “typical response” of Western medicine is to surgically remove the gallbladder (a procedure known as cholecystectomy), if there’s a problem.  But, again, you ought to know that there are many non-invasive, non-toxic techniques to ward off gallstones.  Let’s take a closer look!

Warning: The standard American diet is a perfect “recipe” for promoting the development of gallstones

Other factors that can raise the risk of developing gallstones include obesity, a sedentary lifestyle, increasing age and certain medications, such as diuretics.

Genetics can also play a role. And, women are statistically more likely to develop gallstones than men.

Note: while losing weight can help cut the risk of developing gallstones, experts recommend that the loss be gradual, and not exceed about 3 pounds a week. As ironic as it seems, prolonged fasting and sudden, drastic weight loss can also trigger the development of gallstones.

The following substances have been shown in human and animal studies to be particularly effective against gallstones. Of course, consult with an experienced integrative physician before supplementing with any of them.

A potent antioxidant, vitamin C works in the body to scavenge harmful free radicals and reduce the oxidative stress that plays a role in gallstone formation.  By helping to convert excess cholesterol into bile acids, vitamin C may help reduce cholesterol concentrations, thereby decreasing the chance of gallstones.

In one study, gallstone patients slated for gallbladder removal were given 2,000 mg of vitamin C a day for two weeks before their surgeries.  These patients were found to have improved bile composition, and less cholesterol crystallization, than those who hadn’t received supplementary vitamin C.

But, a 2009 study yielded even more dramatic findings.

In an observational study involving over 2,100 subjects, researchers found that regular vitamin C users were a whopping 66 percent less likely to develop gallstones than those who didn’t supplement.

Imagine if these results were achieved by a brand-new drug?!  The pharmaceutical companies would doubtless crow over these remarkable results in a non-stop barrage of commercials.

Ironically, however, non-toxic, natural, inexpensive vitamin C has received no such media fanfare in the decade following this study – a typical result when it comes to the therapeutic benefits of any vitamin.

Like vitamin C, EPA and DHA inhibit cholesterol crystallization and improve bile composition.  In a study published in Journal of Nutrition, researchers gave 11.3 grams a day of omega-3s from fish oil to obese women who were on medically supervised weight-loss diets of 1,200 calories per day.

When compared to the placebo group, the omega-3 group experienced a reduction in the time it took to form cholesterol crystals, thereby slowing gallstone formation.  As an added “bonus:” the researchers noted that the group also enjoyed a reduced risk of heart disease.

The team concluded that omega-3 fatty acids can cut the risk of developing gallstones that accompanies rapid weight loss – an especially important point for those looking to improve their health!

SAM-e is a useful tool for promoting gallbladder health

SAM-e, short for S-adenosylmethionine, is a molecule found naturally in the body. With potent anti-inflammatory and mood-elevating effects, SAM-e is currently used to treat a variety of ills, including arthritis pain and depression.

This versatile compound also has a protective effect on the liver and gallbladder.

In addition, SAM-e improves bile flow and decreases cholesterol concentration – two important defenses against gallbladder problems. Like vitamin C, it contributes to antioxidant protection, and reduces the oxidative stress that can trigger gallstones.

Natural health experts normally advise SAM-e dosages in the area of 600 mg to 1,200 mg a day, but check first with your own healthcare provider.

Curcumin from turmeric: The “golden spice” has a glowing reputation for fighting gallstones

Curcumin, the active ingredient in the medicinal spice turmeric, has long been valued by natural healers for its ability to ease inflammation, combat infection and fight cancer. A carotenoid, or natural plant pigment, curcumin is responsible for the brilliant yellow-orange coloration of turmeric.

Both animal and human studies have shown that curcumin has the ability to improve cholesterol and lipid metabolism, increase bile flow, reduce gallbladder inflammation and promote normal bile acid metabolism.

There is even evidence that curcumin can reduce post-operative pain and fatigue after gallbladder removal. In an intriguing study published in Surgical Endoscopy, patients who had their gallbladders removed required less pain medication when they were given curcumin.

Curcumin is available in supplemental form, with typical dosages ranging from 500 mg to 2,000 mg a day.  Just be sure to look for a formulation that includes black pepper – which greatly improves curcumin absorption.

EGCG, or epigallocatechin gallate, is a flavonoid found in green tea. This potent antioxidant and anti-inflammatory has been demonstrated to prevent gallstones in animals – and human studies back this up.

Not only does EGCG prevent gallstones, but it appears to play a role in warding off some of the potentially life-threatening forms of gallbladder disease.

A population-based study in China, published in International Journal of Cancer, showed that drinking at least one cup of green tea for six months cut the risk of developing gallstones by 27 percent, the risk of bile duct cancer by 35 percent and the risk of gallbladder cancer by 44 percent.

Not a bad payoff for merely sipping a daily cup of fragrant and refreshing green tea!

Take action: Reduce the risk of gallstones with natural techniques

You can cut your risk of gallstones by removing white sugar, refined carbohydrates and saturated or trans fats from your diet – while eating plenty of fiber-rich fresh fruits and vegetables and healthy amounts of monounsaturated fats (such as those found in avocados, nuts and olive oil).

Note: an influential 2017 French study showed that people who consumed a Mediterranean diet – which roughly mirrors the above suggestions – enjoyed a dramatically lower risk of gallstones.

And, it couldn’t hurt to add garlic, onions, fenugreek and cayenne to your diet – all have been associated with lower risk of gallstones.

And, finally, increasing your activity level can help ward off gallstones, too. One study showed that between two and three hours of moderate exercise per week could lower the odds of developing gallstones by 25 percent.