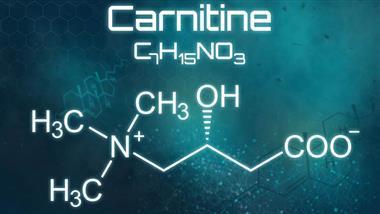 A recent meta-analysis found men and women experienced improvements in waist circumference and blood pressure, two biomarkers of metabolic syndrome, when taking carnitine supplements.1 Metabolic syndrome is a condition characterized by a cluster of physical factors, including:2

Metabolic syndrome is diagnosed when a person has three or more of these factors, which sets the stage for multiple chronic diseases including Type 2 diabetes, cardiovascular disease, Alzheimer’s disease,3 nonalcoholic fatty liver disease (NAFLD)4 and more.

The presence of insulin resistance is a primary factor in metabolic syndrome, which has grown to epidemic proportions as the U.S. diet became more reliant on polyunsaturated fatty acids (PUFAs) and added sugars. You’ll find PUFAs in vegetable oils, edible oils, seed oils and plant oils, including sunflower, safflower, soybean, corn and other popular oils.

While recent research has identified how carnitine and choline may improve fat metabolism and metabolic flexibility, it’s important to note that taking a supplement cannot overcome the damage to your body from a poor diet high in processed sugars, PUFAs and processed foods.

Carnitine is an amino acid that’s found throughout the body. You get most of the carnitine your body uses from your diet or a supplement, and it is crucial to fat metabolism for energy.5 A recent review of the literature on carnitine was published in the journal Nutrients, in which the scientists analyzed the results of nine randomized controlled trials.6

The trials the researchers included in the analysis recorded measurements of waist circumference, fasting blood sugar, blood pressure, triglyceride levels or HDL cholesterol. The studies used dose supplementation between 0.75 grams (gm) and 3 gm per day for eight to 24 weeks.

The researchers found that supplementation was linked to a reduction in systolic blood pressure and waist circumference. They suggested biomarkers of metabolic syndrome (MetSyn) could improve with a dose of 1 gm to 3 gm per day of carnitine. The researchers wrote:7

Understanding how the body burns fuel has practical applications for athletic performance and to prevent metabolic conditions. There is a complex system that modulates how the body burns carbohydrates and fats. Carnitine plays an important role in fat metabolism and has been studied and used to improve exercise performance.

Researchers and athletes have found short term supplementation with carnitine has little effect on fat metabolism. However, in one study led by Dr. Benjamin Wall published in the Journal of Physiology, the data showed supplementation for six months raised levels of muscle carnitine by 21%.8

In other words, individuals with higher levels of carnitine did not burn muscle glycogen, but instead continued to burn fat for energy. During high intensity exercise the muscles produced less lactate when the participant had more carnitine and PDC activity was increased. Starting in the 1980s, researchers began to develop a better understanding of the role lactate plays in exercise.

As the demand for energy increases with exercise, muscle fibers that burn glucose create pyruvate as a product of the reaction. When the production of pyruvate exceeds the muscles capacity to consume it, pyruvate is reduced to lactate and then transported to oxidative muscle fibers where it can be used as fuel.10

The study led by Wall has implications for athletic performance and prompted subsequent studies showing carnitine had an impact on improving metabolic flexibility. One study evaluated whether carnitine supplementation could change metabolic flexibility and insulin sensitivity in people who had documented impaired glucose tolerance.11

Your Muscle Fibers Depend on Fat Metabolism

It is important to note that in the study led by Wall, participants taking carnitine supplements raised their athletic performance and work output by 11% in a 30-minute performance trial. The researchers explained this improvement “by the dual role of carnitine — glycogen sparing at low intensities and reduced muscle lactate accumulation at high intensities.”12

In other words, work output was more efficient, and performance was better when the muscles were burning fatty acids for energy. This is also demonstrated by the symptoms of carnitine deficiency which can include muscle weakness, fatigue, and shortness of breath or swelling if the heart is affected.13

Many cells in the body use fatty acids for energy production. In fact, your heart muscle cells use fat metabolism to meet up to 90% of the energy needs. During rest and mild intensity exercise, fat metabolism is the main energy source for your skeletal muscles.14 Thus, the ability to efficiently and effectively burn fat for fuel can improve your metabolic flexibility and reduce the potential risk of insulin resistance.

Both choline and carnitine help burn fat. In one study, scientists evaluated the effect on energy production with the supplementation of one or both, with and without exercise. The researchers engaged 19 female participants15 and found the interactive effects of the supplements previously documented in animal models was also present in human participants.

The scientists found that when the participants were supplemented with more choline than they would normally get from their diet, the body conserved carnitine in the tissue that enhanced fat metabolism in the participants.

Interestingly, when exercise was added they had improved exercise performance and it decreased the participants body weight but not body fat. The data led the researchers to conclude sequencing the supplementation of choline and carnitine resulted in incomplete fat metabolism and energy wasting, which rose with mild exercise.

Your gut microbiota metabolizes choline and carnitine to produce trimethylamine, which is further metabolized to trimethylamine n-oxide (TMAO). Some studies have linked the production of TMAO with an increased incidence of cardiovascular disease, prediabetes and thrombosis.16,17,18

However, in a paper published by James DiNicolantonio, Pharm.D., he and his colleagues showed the probable cause of elevated levels is not the ingestion of carnitine and choline, but is more likely hepatic insulin resistance.19 According to DiNicolantonio, a key factor is the significant elevation of TMAO through the flavin-containing monooxygenase-3 enzyme (FMO3). He writes:20

“Factors which upregulate hepatic expression and activity of FMO3, chiefly responsible for conversion of TMA to TMAO, therefore, fall under suspicion. In this regard, it is notable that subnormal hepatic insulin activity reflecting hepatic insulin resistance has been found to boost hepatic FMO3 expression.

DiNicolantonio proposes that elevated FMO3 activity in the liver can reflect insulin resistance in the organ, which in turn influences cardiovascular health risk. This, he believes, “can rationalize the epidemiology of TMAO.” He explains:21

It is therefore straightforward to postulate that TMAO can serve as a marker for hepatic insulin resistance, and that this explains at least a portion of the risk for cardiovascular events and diabetes linked to TMAO.”

If elevated TMAO raises your cardiovascular disease risk and is indeed a reflection of hepatic insulin resistance after consuming foods high in carnitine, what can you do to correct it and lower your risk? To begin, you’ll want to normalize your weight.

Two strategies that are most helpful in to achieve this goal and improve your metabolic flexibility are a cyclical ketogenic diet and intermittent fasting. To achieve the best results, they should be done together. You can learn more about these strategies in “Boost Your Metabolism With a Cyclical Ketogenic Diet,” and “Why Intermittent Fasting Is More Effective Combined With Ketogenic Diet.”

In these articles you’ll discover how these powerful tools rejuvenate your health. You may also consider certain supplements that may be beneficial in the treatment of hepatic insulin resistance, and therefore reduce the potential damage from TMAO.22

• Berberine — In the body, this functions much like metformin, a commonly used medication for the treatment of diabetes.23 Both work at least in part, by activating adenosine monophosphate-activated protein kinase (AMPK). Known as the “metabolic master switch,” AMPK is an enzyme that controls how energy is produced in your body and how it’s used by the cells.24

By activating this enzyme, it helps regulate the biological activities that normalize lipid, glucose and energy imbalances. Berberine, used in Chinese medicine to treat diabetes, has also been shown to counteract hepatic insulin resistance in diabetic rodents.25,26

• Astaxanthin — This is a powerful carotenoid antioxidant, with activity like that of the cholesterol-lowering drug fenofibrate. It indirectly stimulates AMPK in your liver and has been shown to alleviate hepatic insulin resistance in animals fed high fat diets and lowers the risk of cardiovascular events in patients with metabolic syndrome.27,28

• Krill oil — This contains the esterified form of astaxanthin, which increases its bioavailability, along with long-chain omega-3 fats essential for good health, including heart health. As noted in DiNicolantonio’s paper:29

“Krill oil, even when compared to fish oil, suppresses hepatic steatosis in rodents. This may be due to its astaxanthin content, which is not found in fish oil.

Moreover, krill oil, but not fish oil, reduces diacylglycerol and ceramide content in the liver. The phospholipid fraction of krill oil has also been noted to reduce hepatic glucose production, unlike fish oil.

Thus, krill oil, being a source of highly bioavailable form of astaxanthin, appears to have additional advantages for reducing hepatic steatosis and hepatic insulin resistance compared to fish oil.”