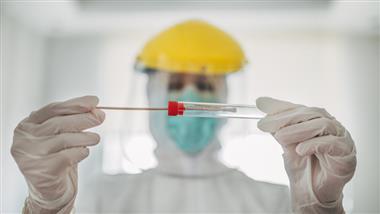 Right now, there are three types of COVID-19 tests:1

The first two, molecular and antigen, are so-called “viral tests” that detect active infections, whereas the antibody test will tell you if you’ve developed antibodies in response to a previous coronavirus infection. It typically takes your body one to three weeks after an infection clears to start making antibodies against the virus in question.

Each of these COVID-19 tests have their issues and controversies. The problem with antibody testing is that there are seven different coronaviruses known to cause respiratory illness in humans.2 Four of them cause symptoms associated with the common cold:

In addition to the common cold, OC43 and HKU1 — two of the most commonly encountered betacoronaviruses3 — are also known to cause bronchitis, acute exacerbation of chronic obstructive pulmonary disease and pneumonia in all age groups.4 The other three human coronaviruses — which are capable of causing more serious respiratory illness — are:

The tricky part is that the antibodies created by these different coronaviruses appear very similar, and the U.S. Centers for Disease Control and Prevention admits recovering from the common cold can trigger a positive antibody test for COVID-19, even if you were never infected with SARS-CoV-2 specifically. As explained on the CDC’s “Test for Past Infection” web page:5

“Antibody tests check your blood by looking for antibodies, which may tell you if you had a past infection with the virus that causes COVID-19. Antibodies are proteins that help fight off infections and can provide protection against getting that disease again (immunity). Antibodies are disease specific …

Unclear if Cross-Reactive Antibody Tests Are Still Being Used

“Early on we had labs using tests that have not received that [U.S. Food and Drug Administration] review and some of those tests … may have given you a false positive and detected the normal coronavirus that circulates and causes the common cold. I would say the vast majority have been extensively tested to show that they do not cross react and give you false positives due to the common cold [anymore].”

While experts at the Mayo Clinic claim these cross-reactive antibody tests were an early problem that has since been corrected and eliminated, the CDC does not confirm or deny the accuracy of this statement on its “Test for Past Infection” web page.7

So, it’s unclear whether the antibody tests manufactured and used today are still capable of delivering a positive result if you were recently exposed and recovered from the common cold virus.

Back on April 29, 2020, infectious disease specialist and CNN medical analyst Dr. Kent Sepkowitz noted that “deciphering between the common cold antibody and the COVID-19 antibody is a real challenge scientifically,”8 but that doesn’t mean it cannot or hasn’t been done.

On a side note, labs are now reporting a shortage of chemicals and disposable pipette tips required to perform COVID-19 tests, which means longer wait times — again. As Scott Shone, director of the North Carolina State Laboratory of Public Health, told The New York Times,9,10 July 23, 2020, “It’s like Groundhog Day. I feel like I lived this day four or five months ago,” referring back to the early days of the pandemic when test supplies were in short supply.

Some Coronaviruses May Impart Resilience Against COVID-19

While the CDC warns it’s still uncertain whether COVID-19 antibodies prevents reinfection, or if it does, for how long, researchers in Singapore have presented evidence11,12,13 suggesting the immunity is likely to be long-lasting.

They discovered common colds caused by the betacoronaviruses OC43 and HKU1 appear to make you more resistant to SARS-CoV-2 infection, and that the resulting immunity might last as long as 17 years.

The authors suggest that if you’ve beat a common cold caused by a OC43 or HKU1 betacoronavirus in the past, you may have a 50/50 chance of having defensive T-cells that can recognize and help defend against SARS-CoV-2. As reported by the Daily Mail:14

Blood was taken from 24 patients who had recovered from COVID-19, 23 who had become ill from SARS and 18 who had never been exposed to either SARS or COVID-19 …

Half of patients in the group with no exposure to either Covid-19 or SARS possessed T-cells which showed immune response to the animal betacoronaviruses, COVID-19 and SARS. This suggested patients’ immunity developed after exposure to common colds caused by betacoronavirus or possibly from other as yet unknown pathogens.”

According to the researchers, their findings demonstrate that:15

“Virus-specific memory T-cells induced by betacoronavirus infection are long-lasting, which supports the notion that COVID-19 patients would develop long-term T-cell immunity. Our findings also raise the intriguing possibility that infection with related viruses can also protect from or modify the pathology caused by SARS-Cov-2.”

Added support for these conclusions were published May 14, 2020, in the journal Cell. This study16 found that not only did 70% of samples obtained from recovered COVID-19 patients have resistance to SARS-CoV-2 on the T-cell level but so did 40% to 60% of people who had not been exposed to the virus. According to the authors, this suggests there’s “cross-reactive T cell recognition between circulating ‘common cold’ coronaviruses and SARS-CoV-2.”

The immunity issue isn’t entirely cut and dry, though. Other research, which looked at antibody levels in recovered COVID-19 patients in Germany, found they lost their antibodies after two to three months.

“Clemens Wendtner, a chief physician at the hospital, tested COVID-19 patients for immunity after they had been treated for the disease at the end of January 2020. The tests showed a significant decrease in the number of antibodies,” DW reported in a July 14, 2020, article.17

“Wendtner says ‘neutralizing’ antibodies, which stop a viral attack, fell in four out of nine of the patients who were tested, within two to three months. Those findings coincide with a similar investigation done in China.

That study also found that antibodies in COVID-19 patients do not persist in the blood. Further research is still required. But these initial findings suggest that a second infection is possible …”

However, it is important to realize that loss of the ability to determine antibody levels may not necessarily reflect lack of immune protection, as there may be innate cell mediated immunity that provides protection that is not being measured by the humoral antibody production.

If reinfection is possible, then COVID-19 would behave much like the common cold and seasonal influenza, which can strike more than once — if not in a single season, then certainly in any given year. If that’s the case, then “immunity passports” and most other COVID-19 interventions, such as school closings and business shutdowns, become even more questionable than they already are.

If the novel coronavirus behaves like common cold viruses, then talk of “immunity passports” and herd immunization is pointless.

If SARS-CoV-2 ends up behaving like other human coronaviruses that cause the common cold, immunity may only last six to 12 months, a European study18 says. Here, they did not look at SARS-CoV-2 antibodies but, rather, antibodies against the other four coronaviruses that cause the common cold, none of which were long-lasting. According to BGR, which reported the findings:19

If the novel coronavirus behaves the same way, then talk of ‘immunity passports’ and herd immunization is pointless. A person who recovered from COVID-19 could get it again in six to 12 months without another vaccine shot …

The researchers note that the human coronaviruses are ‘biologically dissimilar’ and ‘have little in common, apart from causing the common cold.’ But SARS-CoV-2 doesn’t have to be similar to any of them to follow the same immunity pattern.”

Is Herd Immunity Against COVID-19 Possible?

The issue of reinfection also raises questions about whether herd immunity is ever going to be possible. Studies cited by The Daily Mail20 claim herd immunity against COVID-19 could be achieved if just 10% to 43% of people develop lasting immunity.

“The concept of herd immunity hinges on people only being affected once, so that when a certain number of people have been infected with the virus already it can’t spread any more.

It remains a mystery as to whether this is the case for COVID-19 but, if it is, then herd immunity could offer some protection during a second wave of the disease …

Researchers now say it could work to some extent if only one or two out of 10 people have been infected naturally and become immune to the disease … Another study has taken a similar line and suggested herd immunity could develop at around 43 percent of the population getting infected … Immunity among the most socially active people, scientists say, could protect those who come into contact with fewer others.”

Optimizing Vitamin D May Be Your Best Bet

Considering the many questions surrounding the possibility of reinfection and herd immunity, I believe one of your best bets is to address an underlying weakness that can have a significant impact on your COVID-19 risk, namely vitamin D insufficiency.

Rather than waiting for a likely harmful vaccine, get proactive and start optimizing your vitamin D level. You can learn more about this in “The Most Important Paper Dr. Mercola Has Ever Written” and “How to Fix the COVID-19 Crisis in 30 Days.” Also start working on reversing any underlying comorbidities such as insulin resistance and obesity.

When Should You Get Tested?

As for testing, I do not recommend getting a viral test (which checks for active infection) unless you have COVID-19 symptoms and need it to guide your treatment. Swabbing the back of your nasal cavity has its risks, and can actually introduce an infection or, some speculate, even some more nefarious agents.

Getting tested just for the heck of it doesn’t really make sense. Even if you test negative, you can get infected at any point after leaving the test site. If you have to get tested in order to travel or return to work, an antibody test may be more appropriate. Even if your antibodies wane with time, you’re still going to be immune for a while.

The best test are your clinical symptoms. If you have symptoms suggestive of coronavirus infection, then my best recommendation is to start nebulizing food grade hydrogen peroxide at 0.1% as suggested in the video below and discussed in my article on the topic.

I would also make sure that your vitamin D levels are adequate, as discussed in my paper on the topic. If you don’t know your vitamin D level and have not been in the sun or taken over 5,000 units of vitamin D a day, it would likely help to take one bolus dose of 100,000 units, and make sure you are taking plenty of magnesium, which helps convert the vitamin D to its active immune modulating form.

Another great option that is less expensive, easier to get and likely more effective than hydroxychloroquine, would be quercetin with zinc as discussed in my recent article on the subject.

– Sources and References
Posted in Coronavirus, Virus | One Comment »