Could Mouthwash Be an Ally in Fighting COVID-19? 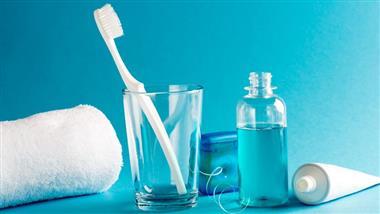 New research1,2,3 shows many dental mouthwashes destroy the lipid layer of coronaviruses and reduces the replication of the virus in the throat and salivary glands, making mouthwash a potentially useful prophylactic against COVID-19. As noted by the authors:4

“Emerging studies increasingly demonstrate the importance of the throat and salivary glands as sites of virus replication and transmission in early COVID-19 disease. SARS-CoV-2 is an enveloped virus, characterized by an outer lipid membrane derived from the host cell from which it buds.”

Mouthwashes that include ethanol, chlorhexidine, cetylpyridinium chloride, hydrogen peroxide or povidone-iodine are especially effective and may even work against any new coronavirus strains that emerge, as the virus’ lipid envelope remains unchanged even when it mutates into new strains.

Previous research5 has also pointed out that certain mouthwashes, particularly povidone-iodine containing ones, may help minimize the risk of viral infections and upper respiratory tract infections. Listerine and 3% hydrogen peroxide have also been shown to eliminate bacteria from toothbrushes with 100% efficacy.6

Unfortunately, extended lockdowns have prevented many from seeing their dentist for regular cleanings and other dental work. Social distancing rules and depression may also have contributed to relaxed dental hygiene among many. This is a grave mistake, as your oral health plays an important part in your overall health.

While mouthwash may lower your risk of COVID-19 infection, their “scorched earth” impact can also create an imbalance in your oral microbiome. Twice-daily use of mouthwash has also been linked to an increased risk of Type 2 diabetes, so, it may be a good idea to weigh the pros and cons of this strategy.

In “For Optimal Health, Mind Your Oral Microbiome,” Dr. Gerry Curatola discusses the drawbacks of mouthwash and fluoride and the importance of maintaining a healthy oral microbiome. That said, hydrogen peroxide may indeed be an excellent prophylactic and remedy against COVID-19 and other viral illnesses, not just as a mouthwash but also as a nebulized treatment.

Dr. Thomas Levy7 has issued guidance8 on how to use nebulized hydrogen peroxide for the prevention and treatment of viral respiratory infections. Dentists are also advised to use 0.5% to 2% peroxide to destroy the SARS-CoV-2 virus as they return to practice,9 and this includes using it as a preprocedural rinse.

How Hydrogen Peroxide Works Against Viruses

To inactivate viruses with hydrogen peroxide, all you need is a nebulizer with a face mask that covers your mouth and nose that emits a fine mist, and food grade hydrogen peroxide that is diluted to 1% or less if you have any irritation. The microscopic mist, similar to smoke or vapor, can be comfortably inhaled deep into your nostrils, sinuses and lungs.

Hydrogen peroxide (H2O2) consists of a water molecule (H2O) with an extra oxygen atom, and it is the additional oxygen atom that allows it to inactivate viral pathogens. Viruses are not “alive” per se. They need a live host in which they can infect live cells that then replicate the viral DNA and RNA. Once a cell is infected, newly replicated viruses exit the cell and move on to the next cell to duplicate the process.

So, when we talk about “killing” a virus, we’re really talking about inactivating it by breaking down its structure. This is how mouthwash can inactivate viruses, and why soap works so well. Coronaviruses are held together by a lipid (fatty) coating. Soap, being amphipathic10 — meaning it can dissolve most molecules — dissolves this fat membrane, causing the virus to fall apart and become harmless.

If you’re already presenting with runny nose or sore throat, Levy recommends using the nebulizer for 10 to 15 minutes four times a day until your symptoms are relieved. You can also use nebulized hydrogen peroxide for prevention and maintenance, which may be advisable during flu season, or while the COVID-19 pandemic is in full swing. Levy notes:12

“As it is a completely non-toxic therapy, nebulization can be administered as often as desired. If done on a daily basis at least once, a very positive impact on bowel and gut function will often be realized as killing the chronic pathogen colonization present in most noses and throats stops the 24/7 swallowing of these pathogens and their associated toxins.

If daily prevention is not a practical option, the effectiveness of this treatment is optimized when somebody sneezes in your face or you finally get off of the plane after a trans-Atlantic flight. Don’t wait for initial symptoms. Just nebulize at your first opportunity.”

Oil pulling is another way to promote and maintain good oral hygiene. It’s ability to break down fat-soluble membranes could potentially render it useful against viruses such as SARS-CoV-2 as well, although there are no studies that I am aware of that have looked into this.

Mouth rinsing and gargling with warm oils is mentioned, however, in a May 11, 2020, paper13 reviewing Ayurvedic approaches that might be helpful for COVID-19 prophylaxis.

Oil pulling has been scientifically verified to help eliminate unhealthy biofilm, debris and harmful bacteria from your teeth,14 much like mouthwash. It basically acts as a safe and natural detergent, without the adverse effects. According to one review paper, oil pulling has been shown to:15

One of the reasons it works so well for cleansing your teeth and gums is because bacteria have fat-soluble membranes that break down with the mechanical action of swishing and pulling the oil through your teeth.16

Coconut oil, which is an excellent option, has the added advantage of inhibiting Streptococcus mutans, the chief bacteria responsible for cavities.17 Another alternative is to use MCT oil, which also has antibacterial properties. To whichever oil you use, you can also add a drop or two of oregano oil or olive leaf oil, both of which have both antibacterial and antiviral18,19 activity.

Here are the basic instructions for how to do oil pulling:

Increasing the pH in your mouth after pulling may reduce bacterial growth even further. To do that, mix 1 teaspoon of baking soda or potassium bicarbonate in 6 ounces of water and gargle. This will alkalize the pH of your mouth, and since bacteria thrive in an acidic environment, the increased pH will discourage growth.

– Sources and References
Posted in Coronavirus, Dental, Oral | No Comments »