Herd Immunity ‘Ahead of Schedule’ 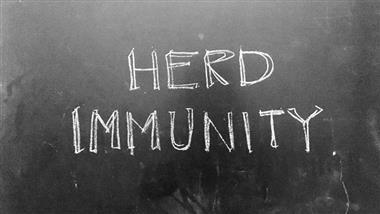 If a novel virus is introduced to a population, eventually enough people acquire natural immunity so that the number of susceptible people declines. When the number susceptible is low enough to prevent epidemic growth, herd immunity is said to have been reached.

In the early days of the COVID-19 pandemic, some experts estimated that 70% of the population or more may need to gain immunity before COVID-19 would be under control. Now, experts are suggesting the percentage may be far lower, and some areas may already have reached what’s known as the herd immunity threshold (HIT).

According to The New York Times, more than a dozen scientists said in interviews that the HIT for COVID-19 is likely 50% or lower. “If that’s true, then it may be possible to turn back the coronavirus more quickly than once thought,” the Times reported,1 and perhaps without the need for a vaccine.

Herd immunity is calculated using reproductive number, or R-naught (R0), which is the estimated number of new infections that may occur from one infected person.2 R0 of below 1 (with R1 meaning that one person who’s infected is expected to infect one other person) indicates that cases are declining while R0 above 1 suggests cases are on the rise.

It’s far from an exact science, however, as a person’s susceptibility to infection varies depending on many factors, including their health, age and contacts within a community. The initial R0 calculations for COVID-19’s HIT were based on assumptions that everyone has the same susceptibility and would be mixing randomly with others in the community.

“That doesn’t happen in real life,” Dr. Saad Omer, director of the Yale Institute for Global Health, told The Times. “Herd immunity could vary from group to group, and subpopulation to subpopulation,” or even zip code.3

When real-world scenarios are factored into the equation, the HIT drops significantly, with some experts saying it could be as low as 10% to 20%. In fact, as the Times suggested, it’s possible that herd immunity for the pandemic is “ahead of schedule.”4

Herd Immunity Threshold for COVID-19 Could Be Under 10%

Researchers from Oxford, Virginia Tech and the Liverpool School of Tropical Medicine5 are among those that found when individual variations in susceptibility and exposure are taken into account, the HIT declines to less than 10%.6

Independent news source Off-Guardian7 also cited data from Stockholm County, Sweden, that showed an HIT of 17%,8 as well as an essay by Brown University professor Dr. Andrew Bostom, who explained:9

“… [A] respected team of infectious disease epidemiologists from the U.K. and U.S. have concluded: ‘Naturally acquired immunity to SARS-CoV-2 may place populations over the herd immunity threshold once as few as 10-20% of its individuals are immune.’”

And, in an article he wrote for Conservative Review, Bostom said:10

“… Naturally acquired herd immunity to COVID-19 combined with earnest protection of the vulnerable elderly — especially nursing home and assisted living facility residents — is an eminently reasonable and practical alternative to the dubious panacea of mass compulsory vaccination against the virus.

This strategy was successfully implemented in Malmo, Sweden, which had few COVID-19 deaths by assiduously protecting its elder care homes, while ‘schools remained open, residents carried on drinking in bars and cafes, and the doors of hairdressers and gyms were open throughout.’”

The findings have implications for vaccination as well. Tom Britton, a mathematician at Stockholm University, told the Times that because viral infections naturally target the most susceptible during the first wave, “immunity following a wave of infection is distributed more efficiently than with a vaccination campaign that seeks to protect everyone.”11

It’s also suggested by Dr. Michael Mina, an immunologist at Harvard University, that, if herd immunity is obtained during “superspreader” events, vaccinating groups that are most likely to be exposed during such events may be sufficient to induce herd immunity, without the need for universal vaccination.12

Herd Immunity Likely in Some Regions

It’s likely that certain areas of the world have achieved herd immunity already, and all eyes are on the fall and winter to see whether or not COVID-19 reappears. “I’m quite prepared to believe that there are pockets in New York City and London which have substantial immunity,” Bill Hanage, an epidemiologist at the Harvard T.H. Chan School of Public Health, told the Times. “What happens this winter will reflect that.”13

Some data also suggest that up to 80% of people tested at clinics had COVID-19 antibodies, and while rates may be lower among the general population, it’s possible that herd immunity may already exist among certain populations. In a survey of random households in Mumbai, up to 58% of residents in poor areas had antibodies, compared to up to 17% in the rest of the city.14

What’s more, one study even found that 81% of people not exposed to SARS-CoV-2, the virus that causes COVID-19, were still able to mount an immune response against it, which “suggests at least some built-in immune protection from SARS-CoV-2 …”15

Sweden, a country that handled the pandemic differently than most of the globe, may also be close to reaching herd immunity. While high schools and universities closed and gatherings of more than 50 people were banned, elementary and middle schools, shops and restaurants have remained open during the pandemic,16 in contrast to many other countries, which instituted strict lockdowns.

Dr. Gilbert Berdine, an associate professor of medicine at Texas Tech University Health Sciences Center, used data on daily mortality rates for COVID-19 to track the course of the pandemic in Sweden, New York, Illinois and Texas, which each used different pandemic responses.

Sweden, which serves as the control group since it did not implement required lockdowns, hit a peak of 11.38 deaths per day per million population on April 8, 2020, and again on April 15, but deaths have declined since.

“Daily mortality has been less than one death per day per million population for the previous eighteen days. Cases are very low. For all practical purposes, the covid-19 epidemic is over in Sweden. Almost certainly herd immunity has been achieved in Sweden irrespective of any antibody test results,” Berdine wrote for the nonprofit think-tank Mises Institute.17

In New York City, the mortality rate from COVID-19 reached beyond 50 deaths per day per million in April 2020, despite a full lockdown being implemented in March. The state ordered nursing homes to accept COVID-19 positive patients from hospitals until May 10, when the order was reversed, but by then the virus was already ravaging nursing homes’ elderly residents — the most vulnerable.

“By facilitating the transmission of the virus from hospitals to nursing homes, the rate of spread within the elderly population was maximized, and any possible benefit from lockdown of the young and healthy population was rendered moot,” Berdine explained.18

In Illinois, meanwhile, a strict lockdown was also implemented and daily mortality rates increased more slowly, reaching a peak of more than 15 deaths per day per million on May 17, 2020.

However, mortality rates have also been slower to decline and death rates have remained higher than in other areas. While the lockdowns appear to have succeeded in flattening the curve and slowing transmission among healthy populations, they also may have lengthened the time that young people could transmit the virus to the elderly.

“The lockdown appears to have made more deaths from covid-19 in Illinois than would have occurred without it,” according to Berdine.19 “Almost certainly herd immunity has not been achieved and will not be achieved until the schools and economy are reopened.”

Texas fell somewhere in the middle, with a looser lockdown than Illinois and New York, although nonessential businesses were closed March 31 and schools were also closed. Daily mortality hit a peak of more than 10 deaths per day per million population on July 31, 2020 — approaching Sweden’s mortality peak while their economy has yet to be reopened. Berdine wrote:

It’s another example that Sweden appears to have gotten it right in their pandemic response, while other regions’ lockdowns may have backfired. At best, Berdine says, lockdowns may have only deferred death for a short time and, at worst, may have caused more deaths than would have occurred if people were left to choose how to manage their own risk.

“After taking the unprecedented economic depression into account, history will likely judge these lockdowns to be the greatest policy error of this generation,”21 she said.

When Will the Pandemic Be Over?

With herd immunity potentially progressing ahead of schedule, and some areas possibly already immune, when will the pandemic end? The World Health Organization has predicted within two years,22 but the dropping fatality rate is no longer a cause for hysteria.

Data show that the COVID-19 fatality rate for those under the age of 45 is “almost zero,” and between the ages of 45 and 70, it’s somewhere between 0.05% and 0.3%.23 Data from the CDC also shows a stark drop in COVID-19 deaths based on provisional death counts, which are based on death certificate data received and coded by the National Center for Health Statistics.24

The fact remains, however, that COVID-19 may never fully disappear. “Covid-19 is not going to be defeated; we will have to learn how to coexist with it,” Berdine said.25 “The only way we can learn how best to cope with covid-19 is to let individuals manage their own risk, observe the outcomes, and learn from mistakes.” Toward that end, take action now to bolster your immune system against infectious diseases of all kinds.

– Sources and References
Posted in Coronavirus, Immunity | No Comments »