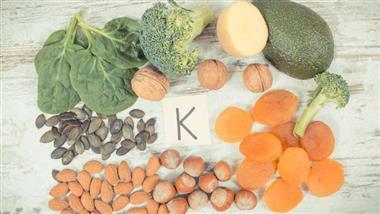 Vitamin K is a fat-soluble vitamin that can be found in some foods. The body uses it for certain functions, such as those required for bone metabolism, blood clotting and a variety of other cellular functions.1

Your body has a limited ability to store vitamin K, so it must be absorbed from your food or a supplement on a daily basis. It’s also recycled within your system, optimizing its benefits.2 Several different medications, such as antibiotics, weight loss drugs, cholesterol medications and the blood thinner warfarin, may interfere with its absorption, and therefore affect blood clotting.

Vitamin K is distributed throughout the body, including in your brain, heart, bones and liver.3 Since it’s broken down and excreted quickly it rarely reaches toxic levels in a way that happens with other fat-soluble vitamins.

Since the vitamin is crucial to several bodily functions, it’s not surprising to learn that if you don’t get enough every day, on a daily basis, you could be at risk for an earlier death.

Recently, a paper was published in the American Journal of Clinical Nutrition by a team that investigated the vitamin K-dependent proteins that may affect atherosclerosis, which is the stiffness and calcification of the arterial vessels.4

The aim of the investigation was to determine if there was an association between circulating vitamin K, cardiovascular disease and all-cause mortality. The study was carried out at Tufts University and led by Kyla Shea, who commented:5

“The possibility that vitamin K is linked to heart disease and mortality is based on our knowledge about proteins in vascular tissue that require vitamin K to function. These proteins help prevent calcium from building up in artery walls, and without enough vitamin K, they are less functional.”

The researchers gathered data from three science databases, including the Framingham Offspring Study. The participants had circulating vitamin K1 (phylloquinone) measured, and each person either had some type of heart event or they died. There were 3,891 men and women with 858 heart events and 1,209 deaths over 13 years.

Since the study was observational, the scientists could not establish a causal link, yet the data fit with what we know about the function of vitamin K in the body. One-third of the participants in the study were not white, which allowed the researchers to theorize that the association is multi-ethnic.7 Dr. Daniel Weiner, nephrologist from Tufts Medical center, explained the association between stiff arteries and CVD:8

“Similar to when a rubber band dries out and loses its elasticity, when veins and arteries are calcified, blood pumps less efficiently, causing a variety of complications. That is why measuring risk of death, in a study such as this, may better capture the spectrum of events associated with worsening vascular health.”

There are two basic types of vitamin K.9 Vitamin K1 is found in green leafy vegetables and works through the liver to help maintain a healthy clotting system. This is the type researchers measured in the study. Vitamin K1 also helps reduce calcification in the blood vessels and assists your bones in retaining calcium.

Vitamin K2 (menaquinone) is produced by bacteria in your gut and can be found in some animal products and fermented foods, particularly cheese and natto. This is the one that helps activate vitamin D and move calcium out of the arterial system and into your bones and teeth.10

There are also several different forms of vitamin K2. They are named for the length of the chemical chain, beginning with the letter M for menaquinone. The two most important types are found in animal products and fermented foods. Most Western diets are deficient in both forms of vitamin K2.11

In one study, researchers sought to compare the effectiveness of giving supplements of these two types, MK-4 and MK-7, to healthy women. They “demonstrated that a nutritional dose of MK-7 is well absorbed in humans, and significantly increases serum MK-7 levels, whereas MK-4 had no effect on serum MK-4 levels.”12

Vitamin K is integral to the body’s ability to coagulate, or clot, blood. These clotting factors are involved in a cascade of events that stop bleeding and are produced in the liver. Therefore, individuals with severe liver disease can have difficulty with vitamin K-dependent clotting and are at an increased risk for hemorrhage.13

As discussed previously, Vitamin K is also integral to moving calcium out of the arterial system and to preventing soft tissue calcification. This function is central to preventing osteoporosis and maintaining strong bone health.

Another benefit is a vitamin K-dependent protein, growth arrest specific gene 6 protein (Gas6), which was identified in 1993 and is found in the heart, kidneys, lungs and cartilage. It contributes to many cellular functions that may play a role in protecting an aging nervous system, and it appears to regulate vascular homeostasis.

Separate studies using vitamin K2 on cancer cells in the lab have demonstrated an apoptotic effect. In one study, researchers found vitamin K2 induced apoptosis in bladder cancer cells and in another, against triple negative breast cancer.14,15

The evidence that your serum vitamin D level is protective against COVID-19 and reduces the severity of the disease continues to grow. While your body produces vitamin D from the reaction to sunlight, many don’t get enough sun to raise their vitamin D levels above 30 ng/mL.

To reach this minimal goal, you may need a supplement. Yet, taking vitamin D3 supplements without magnesium and vitamin K2 may offer little effective protection and could increase your risk of atherosclerosis. Before you can determine how much supplementation is needed, you’ll want to test your current level. You can do this using a home kit through GrassrootsHealth.16

The kit is delivered to your home where you use a finger stick and send the kit back to the lab. Only you get the results of the test, which you can then input into the GrassrootsHealth calculator to determine the amount of supplement you’ll need to achieve your desired result.17

Vitamin D is important in the absorption and utilization of vitamin K2. In fact, a vitamin K deficiency may contribute to symptoms of “vitamin D toxicity.” In my interview with Dr. Kate Rheaume-Bleue, natural health physician and author of Vitamin K2 and the Calcium Paradox, she talked about this challenge:18

“We don’t see symptoms of D toxicity very often but when we do those symptoms are inappropriate calcification. That’s a symptom of D toxicity and that is actually a lack of vitamin K2 that will cause that. K2 protects you against that toxicity quite simply.”

Added to this, I’ve written about the importance of vitamin K2 when you’re taking supplemental vitamin D3 to avoid excessive calcification in your arteries. Magnesium is also a crucial part of raising your vitamin D level as it is necessary for the activation of the vitamin.

Without sufficient amounts your body can’t properly use the vitamin you’re taking. Mohammed Razzaque is a professor of pathology at Lake Erie College of Osteopathic Medicine in Pennsylvania. He notes that without magnesium, vitamin D supplements may not be useful.19

To lower the risk of vitamin D deficiency it’s necessary to have optimal amounts of magnesium.20 According to one scientific review, as many as 50% of Americans who are taking vitamin D supplementation may not benefit, as it’s stored in the inactive form without sufficient levels of magnesium.21,22

GrassrootsHealth published research that was based on data from nearly 3,000 people showing you must take 244% more vitamin D if you aren’t also taking a magnesium and vitamin K2 supplement.25 Practically speaking, this means when you take all three in combination you’ll need far less vitamin D to achieve a healthy level.

There are several forms of magnesium. In each form, the magnesium is bound to another molecule. Some forms have compounds that serve other functions in the body, as you’ll find in “NYC Doctor Highlights Importance of Vitamin D Optimization”:

Since most people eating a Western diet are deficient in vitamin K2 and the vitamin is quickly used and excreted, it’s important to either change the foods you eat, or consider supplementation. As noted in the featured study, those with higher levels of vitamin K have a lower risk of death.

– Sources and References
Posted in Nutrition, Supplements, Vitamins | No Comments »


« Oleander Is a Deadly Plant, Not a COVID-19 Cure
Curve Flat, Still in Lockdown, Billions Wasted on Ventilators »