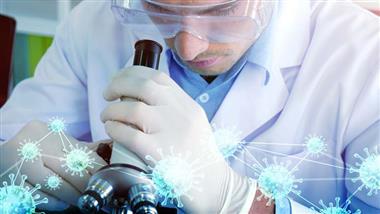 Aside from sepsis — which in one study1 was present in 59% of COVID-19 patients and 100% of those who died — blood clots also appear to be common in patients with severe COVID-19 disease.2,3,4,5 As reported by STAT news:6

“Doctors treating the sickest COVID-19 patients have zeroed in on a new phenomenon: Some people have developed widespread blood clots, their lungs peppered with tiny blockages that prevent oxygen from pumping into the bloodstream and body …

Physicians from the U.S., the Netherlands, and China have published a number of case reports in scientific journals about Covid-19 patients with a multitude of small blood clots. In one report, researchers in China said 7 out of 10 patients who died of Covid-19 had small blood clots throughout the bloodstream, compared to fewer than 1 in 100 people who survived …

It still isn’t clear why the virus leads to these blood clots forming, or why patients’ bodies can’t break them up. It also isn’t clear how significant a role they play in a patient’s illness.”

“A hallmark of severe COVID-19 is coagulopathy, with 71.4% of patients who die of COVID-19 meeting … criteria for disseminated intravascular coagulation (DIC) while only 0.6% of patients who survive meet these criteria.

Additionally, it has become clear that this is not a bleeding diathesis but rather a predominantly pro-thrombotic DIC with high venous thromboembolism rates, elevated D-dimer levels, high fibrinogen levels in concert with low anti-thrombin levels, and pulmonary congestion with microvascular thrombosis and occlusion on pathology in addition to mounting experience with high rates of central line thrombosis and vascular occlusive events (e.g. ischemic limbs, strokes, etc.) …

There is evidence in both animals and humans that fibrinolytic therapy in Acute Lung Injury and ARDS improves survival, which also points to fibrin deposition in the pulmonary microvasculature as a contributory cause of ARDS and would be expected to be seen in patients with ARDS and concomitant diagnoses of DIC on their laboratory values such as what is observed in more than 70% of those who die of COVID-19.”

There’s a whole lot of tongue twisting medical jargon in that abstract, but the key points are these: DIC8 refers to a systemic disorder that affects blood coagulation and can result in organ dysfunction and death.

Prothrombotic DIC causes blood clots to form while simultaneously activating the fibrinolytic system9 — the pathway responsible for degrading and removing clots in the blood stream. The process is dysregulated, however.

The final step in the fibrinolytic process is the cleavage of fibrin, which results in the formation of degradation products such as D-dimer.10 High D-dimer levels indicate that your body is breaking down one or more blood clots.

Fibrinogen is a clotting factor essential for proper blood formation. Fibrinogen levels typically rise when inflammation or tissue damage is present. Fibrinogen is broken down by the enzyme thrombin into fibrin, which causes a clot to form.

As the name implies, antithrombin11 is a protein that inactivates enzymes involved in blood coagulation. In COVID-19, antithrombin levels tend to be low and fibrinogen levels high. The end result is blood clots that are not properly degraded and removed.

According to a February 19, 2020, report12 in the Journal of Thrombosis and Haemostasis, abnormal coagulation is associated with poor prognosis in patients with COVID-19.

Of 183 consecutive COVID-19 patients treated in a Chinese hospital, those who died had significantly higher levels of fibrinogen, D-dimer and other fibrin degradation products; 71.4% of those who died also met the criteria of DIC, compared to just 0.6% of those who recovered.

Lewis Kaplan, a University of Pennsylvania physician and head of the Society of Critical Care Medicine, told The Washington Post13 that while clotting complications are common in cancer and trauma patients, “they don’t clot like this.”

According to Kaplan, “The problem we are having is that while we understand that there is a clot, we don’t yet understand why there is a clot.” The Washington Post14 also quotes Harlan Krumholz, a cardiac specialist at the Yale-New Haven Hospital Center, who said:

“One of the theories is that once the body is so engaged in a fight against an invader, the body starts consuming the clotting factors, which can result in either blood clots or bleeding. In Ebola, the balance was more toward bleeding. In COVID-19, it’s more blood clots.”

Interestingly enough, the Journal of Thrombosis and Haemostasis paper15 highlights the link between DIC and sepsis, noting that:

“Sepsis is well established as one of the most common causes of DIC; development of DIC results when monocytes and endothelial cells are activated to the point of cytokine release following injury, with expression of tissue factor and secretion of von Willebrand factor.”

In other words, COVID-19 patients found to have blood clots should probably be assumed to have sepsis as well, and the sepsis must be properly addressed too. Unfortunately, sepsis is commonly overlooked, even by medical professionals, as many of the symptoms of sepsis look very similar to those of both flu and COVID-19. Examples include high fever with chills and shivering, unusual sweating, dizziness, difficulty breathing, shortness of breath, muscle pain and cold, clammy skin.

Cellular and molecular biologist Judy Mikovits, whom I recently interviewed, believes the clotting issue is related to cytokine release but not from SARS-CoV-2. She is confident that a coinfection with the retrovirus XMRV is causing this problem.

Dr. Paul Marik’s protocol of intravenous (IV) vitamin C with hydrocortisone and thiamine (vitamin B1) has been shown to dramatically improve chances of survival in patients with sepsis.16

His retrospective before-after clinical study17,18 showed giving patients 200 mg of thiamine every 12 hours, 1,500 mg of ascorbic acid every six hours, and 50 mg of hydrocortisone every six hours for two days reduced mortality from 40% to 8.5%. Importantly, the treatment has no side effects and is inexpensive, readily available and simple to administer, so there’s virtually no risk involved.

Marik’s sepsis protocol can be a lifesaver, so you’d be wise to discuss it with your doctor any time you’re hospitalized, especially if you or someone you love is diagnosed with COVID-19, considering how common sepsis is in those with more severe disease.

Sepsis is also often the result of a secondary infection contracted while in the hospital, and they’re now finding hospitals are primary vectors of disease, so it’s prudent to be prepared.

This way, should you develop sepsis while you’re admitted, your medical team already knows your wishes and can act swiftly. According to Marik, the best results are obtained when the concoction is administered within the first six hours of presentation of symptoms.19 The longer you delay treatment, the less likely it will be successful. If your doctor refuses to consider it offhand, convince him or her to review the studies cited here.20,21,22,23,24,25,26,27,28

As for the blood clots, doctors are unsure and divided when it comes to treatment. Some believe it’s advisable to administer blood thinners early, even in mild cases treated at home. Some case studies, however, suggest anticoagulants aren’t doing much to improve outcomes.29

“Doctors around the country are already giving patients heparin or tPA … The drug tPA does carry its own risk. It’s typically given to stroke patients within hours of symptoms to reduce the risk of bleeding in the brain.

But [transplant surgery fellow and researcher Hunter] Moore pointed out that the risk of those bleeds for patients on tPA is lower than for Covid-19 patients who are placed on ECMO [extracorporeal membrane oxygenation] machines to improve oxygen levels in their blood.”

Holistic prophylactic alternatives that might be beneficial against blood clots include proteolytic enzymes such as lumbrokinase, nattokinase and serrapeptase, all of which act as natural anticoagulants by breaking down the fibrin that forms the blood clot.

As noted in one 2018 Scientific Reports paper,32 “Defibrinogenation, inhibition of platelet aggregation, and/or interference with components of the blood coagulation cascade are some of the key mechanisms by which proteolytic enzymes exert their anticoagulant effect.” They also have anti-inflammatory effects.

Lumbrokinase, a complex fibrinolytic enzyme extracted from earthworms, is a highly effective antithrombotic agent that reduces blood viscosity and platelet aggregation.33 It also degrades fibrin, which is a key factor in clot formation.34,35

Some researchers have suggested lumbrokinase could be used “as secondary prevention after acute thrombosis,” such as heart attacks and stroke.36 A 2008 study37 found its antiplatelet activity protected against cerebral ischemia.

Nattokinase, produced by the bacteria Bacillus subtilis during the fermentation of soybeans to produce natto,41 is a strong thrombolytic,42 comparable to aspirin43,44 without the serious side effects.

It’s been shown to break down blood clots and reduce the risk of serious clotting45 by dissolving excess fibrin in your blood vessels,46 improving circulation and decreasing blood viscosity. Interestingly, in one in vitro study,47 the thrombolytic activity of equimolar amounts (meaning equivalent amounts) of nattokinase and tPA were found to be identical.

Serrapeptase, also known as serratiopeptidase, is a substance produced in the gut of newborn Bombyx mori silkworms that allows them to dissolve and escape from their cocoons.

Research48 has shown it can help patients with chronic airway disease, lessening viscosity of sputum and reducing coughing. Like lumbrokinase and nattokinase, serrapeptase breaks down fibrin. It also helps dissolve dead or damaged tissue without harming healthy tissue.49

– Sources and References
Posted in Blood, Coronavirus | No Comments »