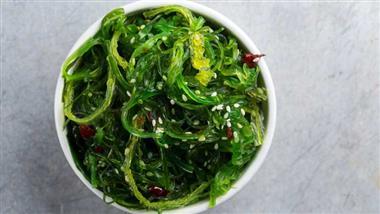 While seaweed is more of a novelty in the typical Western diet, save for an occasional sushi dinner or bowl of miso soup, it’s been a staple food in Japan, Korea and China since ancient times. In Japan, seaweed may account for more than 10% of the diet, and 21 different types are used in everyday cooking.1

Seaweed is highly nutritious and provides a rich source of micronutrients.2 However, it also has powerful antiviral properties and researchers are looking into seaweed extracts as potential treatments against SARS-CoV-2, the virus that causes COVID-19.

Researchers from the Center for Biotechnology and Interdisciplinary Studies (CBIS) at Rensselear Polytechnic Institute tested the antiviral effectiveness of seaweed extracts against SARS-CoV-2,3 with promising results.

Five sulfated polysaccharides were tested, including variants of heparin, which is widely used for anticoagulant therapy,4 (heparin, trisulfated heparin and a nonanticoagulant low molecular weight heparin) along with the fucoidans RPI-27 and RPI-28.5

“We’re learning how to block viral infection, and that is knowledge we are going to need if we want to rapidly confront pandemics,” said lead researcher Jonathan Dordick in a news release. “The reality is that we don’t have great antivirals. To protect ourselves against future pandemics, we are going to need an arsenal of approaches that we can quickly adapt to emerging viruses.”6

A dose response study was performed with the extracts, revealing the effective concentration that inhibits 50% of viral activity — known as EC50. A lower EC50 is indicative of a more effective extract. The results, given in molar concentration, revealed that RPI-27 had an EC50 of about 83 nanomolar, compared to remdesivir’s 770 nanomolar, which was revealed via separate research.7

Remdesivir is an antiviral drug that has shown some promise in treating COVID-19, however serious side effects have been reported, including kidney failure.8 With the seaweed extracts, however, no cellular toxicity was found, even at the highest concentrations.

A New Method of Treatment

Robert Linhardt, a Rensselaer professor who’s collaborating with Dordick, said what’s most intriguing is uncovering a potential new way to treat an infection:10

“The current thinking is that the COVID-19 infection starts in the nose, and either of these substances could be the basis for a nasal spray. If you could simply treat the infection early, or even treat before you have the infection, you would have a way of blocking it before it enters the body.”

Because the seaweed compounds can also be consumed orally, they may also be beneficial for addressing gastrointestinal infections, according to Dordick. In fact, while remdesivir must be delivered intravenously, the seaweed extracts could be delivered through a nasal spray, inhaler or orally. When taken orally, seaweed fucoidans are considered “Generally Recognized as Safe.”11

The seaweed extracts appear to work against SARS-CoV-2 via what’s known as a decoy technique, which has previously been used against dengue, Zika, influenza A and other viruses. According to the Rensselaer Polytechnic Institute in a news release:12

“The spike protein on the surface of SARS-CoV-2 latches onto the ACE-2 receptor, a molecule on the surface of human cells. Once secured, the virus inserts its own genetic material into the cell, hijacking the cellular machinery to produce replica viruses.

But the virus could just as easily be persuaded to lock onto a decoy molecule that offers a similar fit. The neutralized virus would be trapped and eventually degrade naturally.”

By binding tightly to the spike protein of SARS-CoV-2, seaweed’s sulfated polysaccharides may act as decoys to interfere with the spike protein binding to the heparan sulfate co-receptor, which could effectively deter viral infection.13

Also worth noting, separate research found that anticoagulants such as heparin led to better outcomes among hospitalized COVID-19 patients. Intubated patients who received heparin had a significantly lower risk of mortality compared to those who did not.14

“It is unknown whether this is a result of heparin’s anticoagulation alone, or to some degree is an effect of its anti-SARS-CoV-2 activity,” the featured study researchers explained.15

While the usage against SARS-CoV-2 is new, seaweed extracts and polysaccharides including carrageenan, alginate, fucan, laminaran and naviculan have long been valued for their antiviral properties.16 In one study of extracts from six Hong Kong brown seaweed species, most of them inhibited herpes simplex virus types 1 and 2, with very low toxicity to other cells.17 They were also moderately effective in inhibiting respiratory syncytial virus (RSV).

In fact, seaweeds are being actively studied in the hopes of finding new compounds to treat viral diseases. In one such study, red and brown seaweed polysaccharides inhibited viral replication of the hepatitis C virus,18 while others have pointed to their diverse modes of action.

“The structural diversity and complexity of marine polysaccharides and their derivatives contribute to their antiviral activities in different phases of many different viral infection processes,” researchers wrote in the journal Carbohydrate Research, noting that seaweed extracts have the ability to inhibit virus internalization and uncoating as well as inhibit virus transcription and replication. Some are also immunomodulatory.19

In another study, 16 extracts of British Columbian seaweeds were investigated and 15 of them were found to have direct virus-killing abilities.20

Japan, where seafood is a dietary staple, had low initial levels of COVID-19 infection, particularly in Hokkaido.

Writing in the Journal of Applied Phycology, researchers from the University of Coimbra and Canada’s Verschuren Centre for Sustainability in Energy and Environment suggested that there may be a connection and the low initial rates “were possibly related to the traditional and widespread consumption of seaweed and the regular supply of iodine in their diet.”21

While cases later increased, they noted, “These reports suggest that seaweed helped Hokkaido populations to reduce contagion in an initial period, but their consumption was not a 100% effective weapon …”22

Seaweed extracts, including carrageenan, have also been found to benefit the common cold, which is caused by different respiratory viruses, including coronavirus. In a study of children and adults, a carrageenan nasal spray reduced the duration of the common cold while also increasing viral clearance and reducing relapse of symptoms.23

The pharmaceutical company Boehringer Ingelheim markets a carrageenan-based nasal spray, but the researchers questioned why the substantial research about the antiviral properties of seaweed extracts appears to have gone largely unrecognized by Big Pharma during the COVID-19 pandemic. They added:24

“Many species of marine algae contain significant quantities of complex structural sulphated polysaccharides that have been shown to inhibit the replication of enveloped viruses including members of the Nidovirales.

Other compounds, both of red algae (e.g., the lectin griffithsin), and other sulphated polysaccharides extracted from green algae (i.e. ulvans) and brown algae (i.e. fucoidans) could be potential antiviral therapeutic agents against SARS-CoV-2.”

Seaweed Is a Superfood

There are many reasons to add seaweed to your diet, even aside from its antiviral potential. It’s an excellent source of iodine, for starters, which in itself is a strong weapon against viral infections. An imbalance of iodine affects your thyroid function, which in turn affects many other systems in your body, including your heart.

As for adults, research published in the American Journal of Hypertension found that a preparation made from seaweed decreased mean blood pressure in 62 middle-aged patients with mild high blood pressure.26

Choosing seaweed from unpolluted waters is crucial, as these plants absorb the contents of the water in which they’re grown. While this is part of what makes them so nutritious, it can also be their downfall if sourced from contaminated waters.

Further, seaweed that comes from large, industrial seaweed “farms” (often in Asia) may be machine harvested in ways that harm the environment. Look for seaweed sourced from unpolluted waters that is harvested in a sustainable, environmentally friendly manner (such as hand harvested).

Also check that your seaweed is processed using only sun drying or low-temperature air drying, not high heat that may damage nutrients.

You may also be able to find seaweed that is regularly tested for chemicals and heavy metals to ensure it’s a pure, health-boosting product. If you want to add some seaweed to your daily meals, there are many to choose from, each with different flavor profiles and uses. Here are a few from Supermarket Guru27 to get started:

– Sources and References
Posted in Coronavirus, Nutrition | No Comments »