Tea With or Without Plastic? 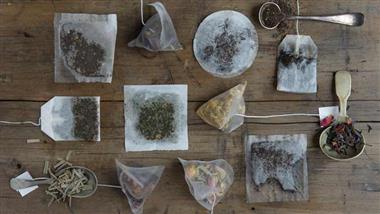 Tea is important to people of many cultures around the world and it has been recognized for centuries as having dramatic and positive impacts on health. It is one of the most popular beverages worldwide, second only to water. There are several easy-to-grow herbs and plants that may be used to make tea at home, but most consumers choose a tea bag to brew their morning or afternoon beverage.

Chances are you’ve never given the tea bag a second thought. But some bags are made with a variety of plastics; researchers have found these leach out of the bag while it’s being brewed. Whether the bag is infused or sealed with plastic, exposure to heat may release microparticles into your tea.

As you become more aware of how plastic is finding its way into the water and food supply, it may spark questions about just how much you’re consuming. Plastics may be found in micro and nano sizes, some too small to be seen by the naked eye.

One key to understanding the size of plastic particles is their dynamic nature since the size and shape may change over time, or under environmental stress. Microplastics fall into a large range, defined as those from 5 mm to 0.1 micrometers (µm) in size, while nanoparticles are as small as 0.001 µm.1

To grasp the size of these plastic particles, note that 5 mm is roughly the size of five grains of salt.2 A hair shaft is approximately 100 µm, and the smallest microplastic is 1/10 the size of a single bacteria.3

How Much Plastic Would You Like With Your Tea?

A soothing cup of hot tea may be just what your body needs to boost phytochemicals and other nutrients. But did you know you may also be drinking 11.6 billion microplastic pieces and 3.1 billion nanoplastics with every cup of tea? Researchers from McGill University recently published the results of a study4 in which they analyzed plastic pollution released from tea bags.

They questioned whether plastic tea bags were releasing microplastics or nanoplastics after being submerged in hot water during the brewing process.5 They used four commercial products packaged in plastic tea bags. The tea leaves were removed to ensure any plastic particles in the tea did not contaminate the analysis of the tea bags.

The empty bags were then placed in hot water to simulate the brewing process. The water was evaluated using an electron microscope, in which the team found a single bag released billions of particles. The researchers report this contamination is at a level thousands of times greater than has been reported with other foods and beverages.

In addition to analyzing the amount of plastic released, the team also sought to determine the effect the particles may have on small aquatic organisms. Using water fleas, which are commonly used to model organisms in environmental studies, the researchers found that when treated with the microparticles and nanoparticles from the tea bags, the organisms survived but demonstrated anatomical and behavioral abnormalities.

The researchers acknowledged the effects on humans from drinking billions of particles of plastic remain unknown and they call for further study in this area.6 But, using paper tea bags is just as dangerous. Most tea bags and even coffee filters are treated with epichlorohydrin to reduce the chances of the product tearing during use.7

Epichlorohydrin is an industrial solvent and a known carcinogen; this chemical gets sprayed on some tea bags.8 In addition to the toxicity associated with the original chemical added to tea bags to reduce tearing, the California Environmental Protection Agency9 notes it degrades in water and may contain a certain impurity also known to cause cancer.

If you’ve been brewing your tea or coffee with bottled water in the hopes of avoiding contaminants commonly found in tap water, it is important to note most bottled water contains microplastics, which actually adds to the toxic burden from your tea bags.

Bottled water is often obtained from municipal water supplies, well water or spring water which is not regulated for polyfluorinated substances (PFAS) by the EPA. The FDA places responsibility for testing on the manufacturer without any oversight from a federal agency.

You May Be Eating One Credit Card in Plastic Every Week

In an analysis by the World Wildlife Fund10 (WWF) undertaken by the University of Newcastle in Australia, scientists found that on average, people are consuming approximately 5 grams of plastic every week in their food and water supply.

The researchers analyzed 52 studies, which highlighted a list of common foods and drinks. They found the average person may ingest as many as 1,769 particles of plastic every week in their water intake. The WWF reports that one-third of plastic waste ends up in the environment, with most of it being the result of mismanaged waste.

While plastic was initially advertised as reusable, half of all new plastic produced over the last 76 years has been manufactured in the most recent 16 years. As noted in the report, the largest source of ingested plastic microparticles is drinking water. Other foods and beverages with high levels include shellfish, salt and beer.11

When you add microparticles ingested from your tea bags, the weight multiplies quickly. The average person is consuming enough plastic every week — just from water — to make one credit card. When the amount of plastic in tea bags is factored into the equation, the charge against your health may come due soon.

A study evaluating plastic particles in human stool from the Medical University of Vienna was presented at the Annual United European Gastroenterology conference in October 2018. As reported in Salon Magazine:12

“Eight people from Finland, Italy, Japan, the Netherlands, Poland, Russia, the United Kingdom and Austria participated in the study. Each person kept a food diary the week before the stool sampling occurred which showed researchers that all participants were exposed to foods that were either wrapped in plastic, or they drank from plastic bottles. Six of the eight ate sea fish, too; none of them were vegetarians.”

Each participant’s stool was tested for 10 different types of plastics, nine of which were found. The impact plastic has on your gut has still not been established. Lead researcher Dr. Philipp Schwabl from the Medical University of Vienna found the results astounding and believes the initial indications are13 “that microplastics can damage the gastrointestinal tract by promoting inflammatory reactions or absorbing harmful substances.”

As human waste is flushed down the toilet and processed at wastewater treatment plants, the process may be ineffective according to results from one study. Researchers14 in the United Kingdom evaluated water supply from six rivers in the northern part of England. Their data showed a higher number of microplastics in receiving waters that were downstream of the wastewater treatment plants.

Researchers believe this confirms that treated sewage is a key source of microplastics. Following those microplastics even farther downstream, it is likely they end up in the environment and may someday become part of the municipal water supply.

There are a significant number of health benefits to drinking tea, so it would be wise to continue the habit, while substituting loose leaf tea for tea bags. As I shared in a previous article, drinking tea may help you develop better brain connections, improve your cardiovascular health, reduce beta-amyloid plaques found in the development of Alzheimer’s disease and reduce the development of atherosclerosis plaques.

While brewing loose leaf tea may require an additional step or two, the process is a simple art form. Here are a few simple guidelines for making the “perfect” cup of tea:

1.Bring water to a boil in a tea kettle (avoid using a nonstick pot, as they too can release harmful chemicals when heated).

2.Preheat your teapot to prevent the water from cooling quickly. Add a small amount of boiling water to the pot or tea cup that you’re going to steep the tea in. Ceramic and porcelain retain heat well. Cover the pot or cup with a lid. Add a tea cozy if you have one, or drape with a towel. Let stand until warm, then pour out the water.

4.Add boiling water. Use the correct amount for the amount of tea you added (i.e., for 4 teaspoons of tea, add 4 cups of water). The ideal water temperature varies based on the type of tea being steeped:

•White and green teas (full leaf) — Well below boiling (170 to 185 degrees F or 76 to 85 degrees C). Once the water has been brought to a boil, remove from heat and let the water cool for about 30 seconds for white tea and 60 seconds for green tea before pouring it over the leaves.

5.Cover the pot with a cozy or towel and let it steep, following the instructions on the package. If there are none, here are some general guidelines. Taste frequently as you want it to be flavorful but not bitter:

6.Once the desired flavor has been achieved, remove the strainer or infuser. If using loose leaves, pour the tea through a strainer into your cup and any leftover into another vessel (cover with a cozy to retain heat).

Sources and References
Posted in Toxins, Water | No Comments »