The Benefits of Muscle Confusion 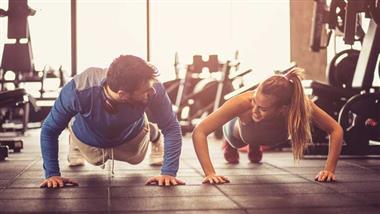 I’ve often stated that, for optimal health and fitness, you need diversity in your fitness routine — something that challenges your body in different ways. A study1 in the December 2019 issue of PLOS ONE sought to ascertain whether randomizing exercises and repetitions produces better results than a traditional weight training program comprised of a fixed set of exercises and repetitions.

The idea is that by “confusing” your muscles by varying your exercises from one session to the next, they’re forced to adapt to constantly changing demands, thus improving growth and strength, and allowing you to avoid training plateaus. As noted by the authors:2

“The term “muscle confusion” has been coined to describe the effects of constantly varying exercise selection as a means to provide a novel stimulus that enhances muscular adaptations. However, research on the topic is limited.

However, to our knowledge, no study to date has endeavored to investigate the effects of randomly undulating exercise selection as some programs advocate. It is conceivable that such frequent rotation of exercises may enhance results by continually providing a novel stimulus to muscles and/or bolstering motivation to train.”

To test the hypothesis that muscle confusion will improve strength and muscle growth by forcing adaptation to a wider set of demands, the researchers recruited 19 healthy men aged 18 to 35 with at least two years of strength training experience.

Muscle strength and leg muscle size were measured at the outset and after the completion of the trial. They were also asked about their motivation levels before and after the intervention, and meals were tracked to avoid dietary confounding. Participants were randomly divided into two groups:

1.The first group performed a conventional strength training routine composed of three sets of six fixed upper- and lower-body exercises, four times a week for eight weeks. Upper and lower exercises were done on alternate sessions. The exercises were done in the same order each week, but weights were increased at regular intervals as strength improved.

2.The second group performed randomized workouts generated by a cellphone app from a database of 80 possible exercises. While the overall number of upper- and lower-body exercises and the weight used matched that of the conventional group, their routines varied from one session to the next.

After eight weeks, strength, muscle size and workout motivation levels were reassessed. Surprisingly, there was virtually no difference in strength and muscle size between the two groups. As reported by The New York Times,3 “it is not easy to confuse a muscle” after all.

In fact, the conventional group’s motivation levels had “slightly declined” by the end of the eight weeks. So, by supporting motivation, varying your exercise routine can go a long way toward improving adherence which, of course, is an important component if you want to enhance or maintain your fitness. The New York Times writes:4

“What these findings suggest is that muscles are not deterred or bored by unvarying routines, says Brad Schoenfeld, an associate professor of exercise science at Lehman College in New York and a co-author of the study.

‘They adapt to load,’ he says, whether that load arrives through the same exercise or a different one each time. But minds are not muscles and could be influenced by novelty, he says. ‘The differences in motivation scores at the end were substantial,’ he says, suggesting that ‘from a purely motivational standpoint, variety matters.'”

When to Limit Exercise Variety

The authors do point out, however, that there are instances in which you might want to limit the variety of your exercises. If your goal is to maximize muscle building, then a conventional, fixed training program may actually be a better bet:

“There may be a trade-off whereby too frequent rotation of exercises somewhat compromises muscle growth and strength; thus, those who wish to maximize these outcomes may wish to limit exercise variety,” the authors note.5

“A possible solution is to keep more complex, free weight exercises (e.g. squats, deadlifts, rows, etc.) in a regular rotation throughout a training cycle and vary movements that have limited degrees of freedom and thus do not require a high degree of motor learning (e.g. leg extensions, machine press, arm curls, etc.).”

That said, it’s important to remember that building muscle requires constant challenge, so even if you adhere to a set workout plan, you still need to continue to raise the challenge level by gradually increasing the amount of weight you use, as well as the reps and intensity.

Karl Smith, who holds a master’s degree in exercise science and a Ph.D. in health education, told Men’s Journal6 he recommends switching up your reps, sets, recovery time and workout volume every six to eight weeks to avoid hitting a plateau.

If the idea of doing the same strength training routine for weeks on end fills you with boredom, consider following ReInvention Fitness owner Doug Barsanti’s advice. Barsanti is a certified strength and fitness coach with a master’s in kinesiology. Men’s Journal writes:7

“Barsanti suggests switching up lower-skill exercises, such as cardio, or smaller muscle-isolation exercises. Functionally, this means following the same general-strength-training program for a full six weeks, but changing up your weekly cardio, hitting the rowing machine one day and the stair climber the next, or, while following your routine, adding or changing isolation exercises here and there.

This means continuing to work your plan for squats, lunges, deadlifts, bench press, pull-ups, and the like, but maybe you isolate your biceps, calves, or triceps a little differently each routine.”

What You Need to Know About Blood Flow Restriction Training

In my opinion, BFR is the most incredible innovation to improve your health that I have learned about in quite some time. It has the most significant potential to increase your healthful life span and help you maintain full range of your mental and physical capacities than anything that I know of.

To help you get started, I have put together a comprehensive article that outlines the benefits of this amazing technique. Click the button below to access it — absolutely FREE!

As I have discussed in many previous articles and interviews that you can see by following the link in the above graphic, I am a major fan of KAATSU and blood flow restriction training. The same principles apply here. You can certainly mix it up for muscle confusion, or use the same exercises routinely.

I personally use KAATSU every day in the cycling mode for walking and stretching exercises. I use it five days a week in training mode with no pulsed mode, just continuous compression. I only use it on my upper body and alternate between there different workouts. The other two days a week I do conventional high-resistance strength training with my personal trainer.

You can also limit boredom and enhance adherence by making sure your fitness routine suits your personality.

While you can’t fit the entirety of an individual into a neat little box, each person contains these five traits in various amounts, and psychologists look at these basic dimensions when ascertaining personality. As described by Live Science, taking these core traits into account when setting up a new fitness regimen can be very helpful. For example, if you are:

To learn even more about motivation — what boosts it and what can make it lag — see my previous articles, “Do You Make This Common Motivation Mistake?” and “How to Make Yourself Love Exercise.”

Active people, and women in particular, tend to focus on the intrinsic value of exercise — things like feeling successful, relaxed and happy during or after each session, rather than having a goal of losing a certain amount of weight by a certain time, or the even more nebulous goal of living longer.

So, keep in mind that your ability to adhere to a regular fitness routine may have a great deal to do with the way you frame your goals. How you think about exercise, or how you frame the idea of it, may help you change your perspective and enjoy your chosen activities.

The process of reframing an idea is an active and dynamic process occurring every day in your brain. In fact, advertisers use it to persuade you to purchase products, and you use it to construct the meaning behind your decisions. Presenting information in a different light allows you to frame the information in such a way that you may justify the decisions you make.

So, rather than thinking of exercise as an alternative or threat to enjoying your free time, socializing with friends or achieving educational or professional goals, change your perspective so that exercise becomes a way of making your desires happen instead.

– Sources and References
Posted in Blood, Exercise, Muscle | No Comments »


« Candida
Beyond Curcumin: Why Turmeric Is Not the Same as Curcumin »