Truth be told: How a low-carb diet prevented polio 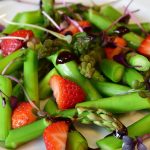 (NaturalHealth365) Although COVID-19 may feel uniquely terrifying, the truth is: the novel coronavirus is only the latest in a series of pandemics and epidemics that have threatened human health.  Remember, in 1948, polio was raging across the United States, taking a particularly heavy toll in North Carolina and in the city of Asheville. Against the spread of this infectious illness stood Dr. Benjamin P. Sandler, a visionary physician who endorsed a low-carb diet to ward off infection.

While some of Dr. Sandler’s assertions remain controversial to this day, he was certainly “ahead of his time” in endorsing a high-protein, low-starch, low-sugar diet. To learn more about this forward-thinking physician – and how his nutritional regimen helped to combat a crippling pathogen –read on.

A sugar-free, low-carb diet may strengthen resistance to infections within a day

In a nutshell, Dr. Sandler believed that a high-sugar, high-starch diet set the stage for polio.  Keep in mind, “starch” is considered a carbohydrate.  This means that Dr. Sandler’s “low-carb” nutritional recommendations are consistent with the best advice given by nutritionists today.

His dietary regimen, which he confidently offered “without reservation,” was simple, safe and easily applicable: avoid foods containing sugar or starch.

Significantly, Dr. Sandler advocated for a diet rich in beneficial high-fiber vegetables and nourishing, high-quality protein – such as lean meat, dairy products and fish.  Noting the prevalence of polio in warm weather, Dr. Sandler also warned against the consumption of “cooling beverages.”

Why did Dr. Sandler object to these drinks?

Pointing out that polio epidemics occur only in countries with high per capita sugar consumption, Dr. Sandler realized that the popular beverages of the day were disastrously high in sugar.

However, Dr. Sandler maintained the body could quickly recover from the damaging effects of sugar and starches.  In just 24 hours of following his nutritional recommendations, reported Dr. Sandler, the body could build up sufficient resistance to the polio virus to prevent infection.

According to Dr. Sandler, maintaining normal blood sugar was of paramount importance in avoiding polio.  In fact, consuming excessive sugar can cause a rise in production of insulin – which triggers the well-known “sugar crash.”

Medically known as hypoglycemia, this condition can cause headache, dizziness, weakness, fatigue, nervousness, sweating, palpitations and fainting.  As Dr. Sandler intuited, another effect of hypoglycemia is poor resistance to infection -hence the increased susceptibility to polio, as well as to influenza and colds.

While blood sugar levels falling too low (from 55 to 75 mg/dL) could lead to polio, individuals with normal blood sugar would “never” contract the disease, Dr. Sandler explained.

Low-carb dietary habits helped to “flatten the curve” of polio

In 1948, Dr. Sandler – who had assisted the research staff at Willard Parker Hospital in New York City during the 1931 polio epidemic – was on staff as a nutritional expert at Oteen Veterans Hospital in Asheville.

And, this occurred in spite of the fact that Asheville is located in North Carolina, which had the second highest case rate in the country in 1948.  At its height, the polio epidemic affected 58,000 American children.  Over 3,000 children eventually died from the disease, with an additional 20,000 left paralyzed.

In 1951, Dr. Sandler wrote his book “Diet Prevents Polio.” He also published six scientific papers on the relationship between diet and disease.

Dr. Sandler’s theory was supported by animal studies.  Researchers working at Columbia University and Cornell University had shown that the only laboratory animal that could contract polio by experimental inoculation was the rhesus monkey.

And they thought they knew why.  Like humans, monkeys sometimes experience subnormal blood sugar levels.

While blood sugar in monkeys could fall as low as 50 mg/dL, the levels of rabbits never seemed to fall below 100 mg/dL. As a result, rabbits are impervious to polio – until low blood sugar levels are experimentally induced.

In a groundbreaking study published in American Journal of Pathology, the team showed that rabbits could be infected with polio if their blood sugar levels were lowered with insulin.

These recommendations may have seemed drastic to some – yet we know now that they make good nutritional sense.  After all, baked goods and candies have been described as “nutritional disasters,” laden with refined sugar, preservatives, chemicals and trans fats.

In addition, Dr. Sandler recommended a technique of replacing “starchy” foods with nutritionally-superior choices, many of which are now recognized as “superfoods.”

These foods are packed with healthy fiber, carotenoids and – perhaps most importantly – cancer-fighting sulforaphanes and isothiocyanates. These powerful plant chemicals, found in humble Brussels sprouts and un-glamorous cabbage, can be your best friends in maintaining optimal health and fighting infections and cancer.

While not all physicians agree that consumption of sweets was linked to the polio epidemic, there is no doubt that Dr. Sandler’s recommendations represent a far healthier way of eating.  Simply put, the contributions of this courageous scientist should not go unrecognized.

One Comment to Truth be told: How a low-carb diet prevented polio