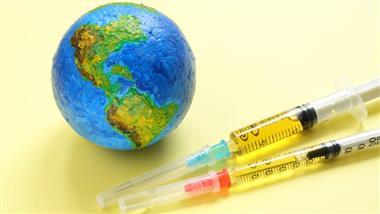 According to the Albany Herald,1 two prominent spokesmen for the pro-vaccine movement are now expressing concerns about the messaging used when promoting Operation Warp Speed — the name given to the White House effort to manufacture and launch a COVID-19 vaccine (as well as other potential therapeutics) at a record-setting pace.

The two long-time pro-vaccine advocates, Dr. Peter Hotez, dean of the National School of Tropical Medicine and professor of pediatrics and molecular virology and microbiology at Baylor College of Medicine, and Dr. Paul Offit, director of the Vaccine Education Center and professor of pediatrics at Children’s Hospital of Philadelphia, fear communication about the accelerated vaccine program may fuel safety concerns that could dampen vaccine uptake. Albany Herald writes:2

“The approach itself is not unreasonable, said Dr. Peter Hotez … But the way it’s being communicated is scaring people, he told CNN. ‘The way the message is coming out of Operation Warp Speed creates a lot of chaos and confusion. And it is enabling the anti-vaccine movement,’ Hotez said …

‘The way they are messaging it is a little frightening because they make a point of saying how quickly it is being done,’ said Dr. Paul Offit … ‘It makes people think there are steps being skipped.'”

Well, the fact of the matter is that steps are being skipped, and there can be serious ramifications when doing so. Simply changing the narrative will not change that.

Hotez also criticized drug company executives for being too obvious in their greed. As reported by Albany Herald:3

The next day, Tal Zaks, Moderna’s chief medical officer, spent $1.5 million to exercise options. He immediately sold the shares for $9.77 million, triggering a profit of $8.2 million. It was all legal, but looked bad, Hotez said. ‘They are shooting themselves in the foot,’ he said.”

Indeed, the message sent by Zaks’ and Kim’s share sales is a terrible one that is not likely to garner public confidence in their product. According to Moderna, the sales were done under automated trading plans called 10b5-1, which means neither needed to take any action for the sales to occur.

But that hardly matters. What people see is Moderna leadership getting rich quick off vaccines that are being rushed through and skipping crucial safety checks. There’s no evidence whatsoever right now that the company’s novel vaccine will actually work, let alone be safe.

Past attempts at developing COVID vaccines have always faltered at this stage as both humans and animals achieved robust antibody response then sickened and died when exposed to the wild virus.

According to director of research services at Equilar, Andrew Gordon, the only way the trades would be deemed illegal would be if Zaks or Kim created or modified their 10b5-1 plans “while in possession of material insider information.”4

Whatever the truth of that may be, what appears clear is the pair raked in nearly $25 million in the days between Moderna’s press release5 announcing its phase 1 trial a success and vaccine safety experts pointing out just how troublesome the results actually were. Even Hotez said he’s “not convinced that this is really a positive result.”6 As reported by Fort Russ News:7

“The two executives pocketed almost $25 million in profits in a day’s work before experts cast doubt on the vaccine’s success and sent shares tumbling. FRN reported on the false reports, citing an article written by Robert F. Kennedy Jr. that the Moderna vaccine results were a failure.

Fake fact checkers working for social media firms tagged FRN’s report as ‘false information’, insisting instead that the Moderna tests had been a success. Investors in biotech and pharma, and the virologists they depend on, apparently agreed with FRN’s assessment.”

Moderna’s phase 1 trial for its mRNA-1273 vaccine, which is being led by the National Institute of Allergy and Infectious Diseases (NIAID) and championed by NIAID chief Dr. Anthony Fauci, involved 45 healthy adults between the ages of 18 and 55. According to the company’s May 18 press release:8

At day 43, two weeks following the second dose, at the 25 µg dose level (n=15), levels of binding antibodies were at the levels seen in convalescent sera (blood samples from people who have recovered from COVID-19) tested in the same assay.

At day 43, at the 100 µg dose level (n=10), levels of binding antibodies significantly exceeded the levels seen in convalescent sera. Samples are not yet available for remaining participants.

However, two days later, May 20, 2020, vaccine safety advocate Robert F. Kennedy Jr. warned “the clinical trial results … could not be much worse.” He writes:9

“Fauci was so confident of his shot’s safety that he waved ferret and primate studies (Moderna suspiciously reported no health data from its mouse studies). That appears to have been a mistake. Three of the 15 human guinea pigs in the high dose cohort (250 mcg) suffered a ‘serious adverse event’ within 43 days of receiving Moderna’s jab.

Moderna did not release its clinical trial study or raw data, but its press release, which was freighted with inconsistencies, acknowledged that three volunteers developed Grade 3 systemic events defined by the FDA as ‘Preventing daily activity and requiring medical intervention.’

Moderna allowed only exceptionally healthy volunteers to participate in the study. A vaccine with those reaction rates could cause grave injuries in 1.5 billion humans if administered to ‘every person on earth.’ That is the threshold that Gates has established for ending the global lockdown.

Moderna did not explain why it reported positive antibody tests for only eight participants. These outcomes are particularly disappointing because the most hazardous hurdle for the inoculation is still ahead; challenging participants with wild COVID infection.

Past attempts at developing COVID vaccines have always faltered at this stage as both humans and animals achieved robust antibody response then sickened and died when exposed to the wild virus.”

A May 26, 2020, article10 in STAT news tells the harrowing story of Ian Haydon, one of the study participants who suffered severe side effects requiring hospitalization. While Haydon says he still has confidence in the vaccine, it’s important to recognize that he is a healthy 29-year-old.

He recovered from the side effects, which included a raging fever, fainting, nausea, muscle pain and generally feeling “as sick as he’d ever felt.” But just imagine what such side effects might do to an elderly person, an infant, young child or someone who is metabolically compromised or has an underlying condition such as a heart problem. For them, the reactions could be far worse.

A question worth asking here is, if there are no biologically plausible mechanisms for vaccine reactions, why do they always occur in trials? Importantly, as noted in The Daily Mail,11 which reported the launch of Oxford University’s vaccine trial for a vaccine known as ChAdOx1 nCoV-19, the COVID-19 vaccine is not being compared to a true placebo (an inert substance such as saline), as is the gold standard for drug safety research.

Instead, it’s being compared to a meningitis vaccine. As discussed in “Dangerous Placebos Used in Medical Trials,” using an active substance such as another vaccine can hide any number of side effects. This is just one way in which vaccine makers “cheat” in their safety studies to minimize the appearance of adverse effects.

All Previous Coronavirus Vaccines Have Failed

What Kennedy refers to in his May 20 article about Moderna’s phase 1 trial results is coronavirus vaccines’ well-recognized tendency to cause paradoxical immune enhancement. He explained this in my interview with him, featured in “Robert F. Kennedy Jr. Explains Well-Known Hazards of Coronavirus Vaccines.” A short clip of that interview is included above.

As explained by Kennedy, the four best vaccine candidates were then given to ferrets, which are the closest analogue to human lung infections. Kennedy explained what happened next:

“The ferrets had an extraordinarily good antibody response, and that is the metric by which FDA licenses vaccines … Then something terrible happened. Those ferrets were then exposed to the wild virus, and they all died. [They developed] inflammation in all their organs, their lungs stopped functioning and they died.

The same thing had happened in the 1960s when they tried to develop an RSV vaccine, which is an upper respiratory illness very similar to coronavirus.

At the time, they did not test it on animals. They went right to human testing. They tested it on I think about 35 children, and the same thing happened. The children developed a champion antibody response — robust, durable.

It looked perfect, [but when] the children were exposed to the wild virus, they all became sick. Two of them died. They abandoned the vaccine. It was a big embarrassment to FDA and NIH.”

The problem, it turns out, is that coronaviruses produce not just one but two different types of antibodies — neutralizing antibodies12 that fight the infection, and binding antibodies13 that cannot prevent viral infection.

“Coronavirus vaccines can be very dangerous, and that’s why even our enemies, people who hate you and me — Peter Hotez, Paul Offit, Ian Lipkin — are all saying, ‘You got to be really, really careful with this vaccine.'”

Many of the COVID-19 vaccines currently in the running — including Moderna’s vaccine — are using mRNA to instruct your cells to make the SARS-CoV-2 spike protein, the glycoprotein that attaches to the ACE2 receptor of the cell. This is the first stage of the two-stage process viruses use to gain entry into cells.

The idea is that by creating the SARS-CoV-2 spike protein, your immune system will commence production of antibodies, without making you sick in the process. You may have noticed Moderna’s press release specifies “binding antibodies” and “neutralizing antibodies.” It’s important to remember the difference between those two when you read these trial results.

– Sources and References
Posted in Coronavirus, Vaccinations | No Comments »


« The Most Important Paper Dr. Mercola Has Ever Written
World Health Organization scrambling to save credibility: Recants admission that asymptomatic spread of COVID-19 is “very rare” »