Why take glutathione and vitamin C together? 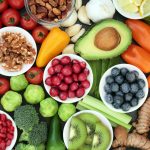 (NaturalHealth365) According to the National Health Council, a troubling 50 percent of American adults suffer greatly with their health.  Thankfully, recent research has shown that a pair of natural substances – glutathione and vitamin C – can help to increase the body’s natural antioxidant defense system.  This, in turn, helps to reduce the risk of excess oxidative stress – which leads to a diminished quality of life.

Researchers have found that these natural compounds work in concert, with each helping to replenish and recycle the other. Let’s take a closer look at the health benefits that are obtained by taking these two natural substances together.

Glutathione – one of the most powerful antioxidants in the body – is also its premier detoxifying molecule, working to neutralize pathogens, environmental toxins and carcinogens.  In addition, it boosts the immune system, increases strength and endurance and encourages the body to form lean muscle rather than fat.

In fact, so strongly tied is glutathione to health and well-being that scientists can use glutathione levels to predict longevity – quite a testament to its influence in the body!

Unfortunately, glutathione levels can be threatened by toxic drugs, environmental toxins and chronic stress – as well as by normal aging.  Unsurprisingly, healthy young people have the highest levels of glutathione, while elderly, hospitalized patients have the very lowest.

Like glutathione, vitamin C can help to boost immune system function.  In fact, studies have shown that vitamin C increases production of life protective antibodies and promotes the function of phagocytes, the body’s scavenger cells.

In addition, vitamin C – which has potent antioxidant, antiviral and anti-inflammatory properties – can protect fragile cell membranes and prevent damage to cell DNA, as well as to important proteins and enzymes (including glutathione).  It is also a cofactor in the production of collagen – which is essential to arterial and heart health.

So, it’s clear to see: insufficient stores of glutathione and vitamin C can cause serious health issues.

Stronger together: Glutathione and vitamin C empower each other

Together, these two antioxidants neutralize harmful free radicals.  This is important, because free radicals cause the unhealthy peroxidation of cell membrane lipids, leading to eventual cell death and increased likelihood of sickness.

Noted functional physician and author Dr. Mark Hyman uses the “hot potato” analogy to explain the antioxidant actions of glutathione and vitamin C.  Free radicals get bounced like a “hot potato” from one antioxidant to another, shuttling from vitamin C to vitamin E – then on to lipoic acid, and finally, glutathione.

Glutathione “cools off” the free radicals while recycling the other antioxidants, sacrificing itself in the process. However, the process ends with the regeneration of more glutathione.  In other words, glutathione and vitamin C function as a “buddy act,” in which each has the other’s back.

Vitamin C also helps to protect glutathione in the tissues, while glutathione coverts worn-out vitamin C (dehydroascorbic acid) back into its active form.  In fact, a study published in the American Journal of Clinical Nutrition demonstrated that glutathione can actually alleviate vitamin C deficiency.

A separate study yielded evidence of the benefits of combining quercetin and vitamin C.

In a placebo-controlled study conducted in 2012, a group of healthy young men were given either 250 mg a day of vitamin C, 500 mg of quercetin, vitamin C and quercetin together, or a placebo for eight weeks.

And the results were eye-opening.

The researchers found that the most pronounced improvements to inflammation levels and cell health occurred in the group that took both supplements. Participants experienced a dramatic 50 percent decrease in levels of the inflammatory marker C-reactive protein – compared to 35 percent in the vitamin C-only group and the quercetin-only group.

Other research has demonstrated vitamin C’s ability to promote the creation of glutathione in the body.

Another study published in the American Journal of Clinical Nutrition showed that two weeks of supplementation with vitamin C, in amounts ranging from 500 mg to 2,000 mg, increased glutathione production by 50 percent – significantly more than increases conferred by high-dose N-acetyl-cysteine.

This is impressive, because NAC has such potent glutathione-restoring abilities that it is used in hospitals to replenish depleted glutathione in the liver resulting from acetaminophen overdose.

Boost glutathione and vitamin C with diet and proper supplementation

You can help your body increase its glutathione production by eating sulfur-rich foods, such as garlic, onions and cruciferous vegetables including Brussels sprouts, cabbage, cauliflower and arugula.

And, bioactive non-denatured whey protein is rich in cysteine, one of the “building blocks” of glutathione.  Supplements such as N-acetyl-cysteine, milk thistle and alpha-lipoic acid help the body produce, recycle and replenish glutathione.

When it comes to ramping up vitamin C intake, red bell peppers, kiwi fruit, strawberries and citrus fruits are among the best sources.

If you would like to take glutathione in supplementary form, many natural health experts advise liposomal glutathione as the most bioactive.  Integrative healthcare providers typically recommend between 250 mg and 500 mg of glutathione a day – but check first with your own doctor before making any changes to your supplement routine.

While the National Institutes of Health lists 65 to 90 mg per day of vitamin C as the recommended daily amount, most experienced healthcare providers will suggest much greater amounts to obtain true health protective results.  Your integrative doctor can help advise an amount that is right for you.

Bottom line: when it comes to protecting your health, glutathione and vitamin C are “on the job.” Maybe it’s time to put this dynamic duo to work for you?

2 Comments to Why take glutathione and vitamin C together?