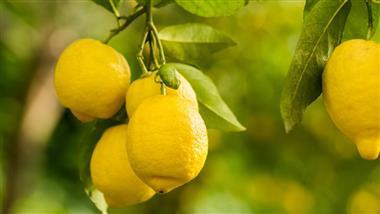 They are bright yellow, the scent is refreshing and they remind you of summer. Lemons appeared millions of years ago, according to scientists writing in the journal Nature.1 However, the lemon we know today is a hybrid grown from some of the five ancient species of citrus that originated in the Himalayas.2

Each of these varieties has its own taste and consistency. They are easily crossbred, and the resulting hybrids can continue to replicate. Citrus trees flourish in semitropical climates, and there are many that make their home in Asia.

Nearly all lemons that are sold in North America are from two varieties, Eureka or Lisbon.3 They are so much alike that they are often grown and packed together. A smaller hybrid, the Meyer lemon, was introduced to the U.S. by Frank Meyer, an agricultural explorer, in 1908.4

Currently, this variety is planted extensively in the U.S. in the state of Texas as well as in Australia and New Zealand. It’s often grown for home use in California and Florida. Some lemon trees can produce up to 600 pounds of lemons every year and most produce fruit all year long. By growing your own trees, you’ll also have access to the leaves, which can be used to make tea.5

Lemons are a part of the Rutaceae family, having been cultivated for their alkaloids and medicinal properties.6 A lemon adds acid to foods, and can brighten flavors. One common way to use a lemon is to juice it.7

To get the most juice from your lemon, be sure the fruit is at room temperature. Roll it on the counter with the palm of your hand and wait a couple of minutes before cutting it in half and using a juicer. But, the juice isn’t the only part of this fruit that can be used. The whole fruit is edible.

You can zest the rind to add flavor to your baking, add juice to sauces and marinades and slice the peel to be added to soups and stews. Lemons are also a nontoxic, all-natural cleaner and hand deodorizer. If you have too many on hand from harvesting your own tree or purchasing them at the store, you’ll need to freeze them before they go bad.

While freezing whole lemons can cause the juice sacks to rupture, taking a few minutes to separate the juice and the rind improves your results. Juice your lemons and reserve the rind. The juice can be frozen first in ice cube trays and then popped out into freezer storage. The rinds can be sliced thinly and frozen separately on a tray before adding them to another freezer container. This prevents them from sticking together.

Lemons are high in vitamin C, low in calories and full of vitamins including calcium, iron, potassium and several of the B vitamins.8 Lemon peel also has a number of health benefits and can be used to produce essential lemon oil.

The health benefits of lemons come from using the juice or peel, not from making lemonade! While it is an acid outside the body, once eaten, it helps to alkalize your pH and counteract the acidifying effects of processed foods and sugar.9

The symptoms of too much acidity in your body include dry skin, sensitive teeth, digestive problems, headaches and brittle hair and nails.10 These clinical symptoms are a sign of a much deeper problem that researchers know contribute to diseases such as cancer, kidney stones, metabolic syndrome and osteoporosis.11

One study found “lemon juice has protective effects on alcohol-induced liver injury in mice.”12 It also may assist with passing gallstones.13 Lemon peels are known to be rich in polyphenols that contribute to digestion and insulin sensitivity.14

Rutin is a bioflavonoid found in lemons that helps vitamin C to work more efficiently.15 It also helps to reduce bleeding, treat hemorrhoids and reduce the potential for hemorrhagic stroke.16,17

Foods rich in polyphenols may also help with weight maintenance. In an animal study, researchers demonstrated that mice that were fed a high-fat diet as well as lemon polyphenols gained much less weight than those who did not receive the treatment.18 In addition, lemons have a molecule called nobiletin.19 The findings from animal studies suggest:20

Let’s Not Forget Essential Oil From the Sunny Lemon

Lemon juice has been commonly used by people with high blood pressure to help lower it. In one study published in 2012 in the Journal of Experimental and Clinical Medicine, researchers described how they engaged 98 people in a prospective study to test the effects of lemon juice on blood pressure.21

After two weeks, the authors did not record any beneficial effects directly from the juice, and they worried that lemons or other citrus fruits potentially could interfere with the metabolism of prescription drugs a patient may be taking. However, data from studies using aromatherapy have shown different results.

In a study from 2010, scientists discovered that the combination of essential oils of lemon, lavender and ylang ylang used in aromatherapy “… is effective in lowering systolic blood pressure and sympathetic nervous system activity.”22

In a second study, it was found that aromatherapy involving only lemon reduced systolic blood pressure after three or four days of intervention.23 The researchers gathered 100 people who had an acute myocardial infarction; they either received lemon inhalation aromatherapy or they were included as part of the control group.

Those who received the aromatherapy showed reduced anxiety and demonstrated greater regulation of their heart rate. The researchers suggested using this type of aromatherapy in coronary care units.

The pleasant citrus fragrance of the oil also makes it an effective air freshener. Lemon oil can also help remove oil, grease and other stains from clothing and other surfaces.24 It have demonstrated antimicrobial activity when tested against Staphylococcus aureus, Enterococcus faecalis, Escherichia coli, and Pseudomonas aeruginosa.25

Lemons Were a Luxury and Other Interesting News

In ancient Rome, lemons were a sign of wealth and privilege. This finding comes from a study by The Sonia & Marco Nadler Institute of Archaeology at Tel Aviv University in Israel. One discovery was that the lemon was relatively rare in ancient Rome and therefore was treated as a luxury only for the wealthy and elite.26

Lemon juice is an exfoliant, yet the acidity can change the pH in your skin and make it photosensitive in the sun.27 Even squeezing lemons outside on a sunny day can result in phytophotodermatitis and burns on the skin that are visible for months.

Another little-known fact is that when lemon juice has been left out in the air it can develop a distinct bitterness.28 Lemons contain a compound called limonin which is produced when the lemon is squeezed, and enzymes break down the precursor limonin glucoside. The reaction takes a little time and so the bitterness develops later.

Bring Summer Into Your Home All Year-Round

With the number of benefits from eating lemons each day, you may want to be able to just grab a few from your garden. Although they love semitropical climates, even if you live in northern climates, there is a lemon tree that can bear fruit indoors when cared for properly.

The easiest of the varieties to grow indoors are Meyer lemons, which are prized for a sweeter flavor and do not suffer from citrus greening disease, which is decimating the groves of citrus trees throughout Florida. Alternatives include Lisbon lemons and Bearss limes, which also can easily be grown indoors.29

Growing Meyer lemon trees is immensely rewarding as they are not only prolific producers, but the blossoms are fragrant and beautiful. They are self-pollinating, and when taken care of properly, a grafted Meyer lemon tree can produce fruit in as little as two years.30 If grown from seed, it takes between 4 and 7 years before you get your first lemon.

The lemon dwarf tree can grow up to 10 feet tall. To enjoy Meyer lemons year-round you’ll want to take a few simple steps to care for your tree. Christopher Satch is the head of plant education at The Sill. In an interview, he told Get Pocket:31

“The real key to success with lemons is giving them enough light and letting them thoroughly dry between waterings. The indoor, full direct sun will correct all their problems. As long as they are in a window that gets a few hours of direct sunlight, they will be fine.”

Your lemon tree will appreciate well-drained soil. Satch advises using potting mix and watering regularly in addition to making sure the plant gets enough light. The soil can be mixed with sand to help with drainage. Terracotta pots work best since they allow the soil to dry faster.

While the plants prefer growing outdoors, under the right conditions they will produce indoors. Plenty of light, high humidity and good air circulation encourages growth. If you plant them outside in a zone that gets weather below 50 degrees F, you need to bring them inside during Satch warns that you can expect a few leaves to drop as the tree will be getting less light and won’t be able to nutritionally support as many leaves as it does outside.

He advises to water the tree and then let the soil dry completely. If a lemon tree is not getting enough water the leaves will wilt. If the leaves are turning yellow and dropping it could be that the roots have gotten too wet or the plant has not been kept warm enough.

When they’re indoors it’s important they get as much sunlight as possible. The more direct sunlight they get, the higher their production. South-facing windows are usually best. He recommends fertilizing once monthly, or every two weeks when the tree is producing fruit.